Opinion The Future of On-Site Sports Betting with BitCoin 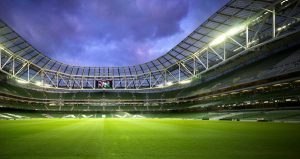 When it comes to the fast-evolving domains of the IT industry, one of the fastest ones is the field of online betting. But, at the same time, this field is also one of those domains which are easily overlooked by the wider IT community. The same is true for the advancements that are constantly being made by the online betting development teams, especially in regards to the digital currencies, which almost immediately became engaged with online betting.

However, similar to many other domains in the IT, the field of online betting provides a great chance for out of the box thinking. An additional advantage that online betting possesses is the readiness of the industry to embrace any solution that shows itself as successful in the market.

This is the reason why funding from investors and new potent technologies accompany each other, mostly free of assessment problems which hinder the rest of the industry. Additionally, this approach that sees R&D and funding go hand in hand regularly ends up creating new possibilities.

For example, recently in E-Sports, more precisely Counter-Strike: Global Offensive, a completely new and novel way of online betting came about. Called skin betting, it sees players use different weapon “skins” or design patterns used as a currency for online betting. Now, the same phenomenon is so popular that different countries are trying to define ways in which it can take place. But this demonstrates that the digital world and the betting opportunities go very well together.

Additionally, new developments seem to be right on the horizon and some of these promise to completely revolutionize the way online betting takes place.

A paper from the famous Deloitte recently provided several interesting ideas how online betting could advance further, especially in regards to a digital currency like BitCoin. Among them, one of the most interesting comes in the form of interactions on physical sports events which take the form of fantasy sports interactions.

These would take the form of a game within the physical game, where the users could place bets using BitCoin’s microtransactions on in-game individual events. For example, fans at a football match could choose to bet whether a free kick that is about to be executed will result in a goal or not.

The paper also showcases the ability of the BitCoin infrastructure to provide stadiums and other physical venues with means of engaging in microtransactions. The same consultancy firm believes that the option will be widely used as a medium for enhancing the stadium experience.

Here, the Deloitte paper explains that, while the sports team or the individual athlete is focused on their results and thus, the best experience for the visitors and fans, it still cannot provide everything everyone wants. Instead, a chance to connect to the stadium digital infrastructure and accessing its stream of data and even betting opportunities should provide a lot more diverse experience.

There is little doubt that the humanity, in general, finds sports competition endlessly engaging. The same trend has existed in the organized society from the very first days of collective living. In fact, some anthropologist believes that the same instinct is connected directly with the need to play and the instinct to improve individual abilities.

As the world and the technology accessible to the population changes, so do the sports but it appears that this group is only getting bigger, while it does not exclude any old sports. E-Sports are a perfect example of how completely new competitive phenomena can enter the world of sports and become its permanent member in less than two decades.

But, while E-Sports are by definition something that takes place in the digital domain, physical E-Sports locations are still very popular venues. A handful of countries, primarily South Korea, created an industry around these events and tournaments.

Because of this, there is no doubt that having a means to enhance the experience of a sporting event would be an instant success. This is especially true if the same method did not utilize additional hardware like VR or AR devices, but simply made use of the visitors existing smartphones.

The possibility of the development of the on-site enhancement would come through the idea that the same venue is not simply a concrete space that is wrapped around the central sporting court, but a stack of different technologies which can all become accessible to the visitors.

For this to become a reality, the stadium infrastructure has to be opened up to the third-party developers, mainly when it comes to blockchain solutions. Here, the Apple’s business model of HaaP (hardware-as-a-platform) could be applied and used as a basis for generating profits.

But, for this to become a reality, the stadiums and other venues would need to let the developers in. This could provide some additional space for threats to security, but it is absolutely necessary for the same process to being.

One of the key developers for this endeavor would have to come from the BitCoin community. Here, startups and established companies could set up the development kits for the BTC betting. When this development begins, the technological layer in the previously mentioned stack that would have to be built on the existing stadiums from scratch.

While this is a huge opportunity, it also comes with a series of challenges. Here, the main problem lies in the fact stadiums and sports venues, in general, are not a part of an interconnected organization. Instead, their teams are and the actual venues might be included in complicated ownership setups. For example, all football teams in the England’s Premier League are privately owned, while at the same time, clubs in Primera, the Spanish top football league, are owned by the actual club members, which often measure groups with over 100,000 individuals in them.

The same is true for the sports venues and often, an additional factor might come about in the form of public ownership where a municipality, city or state could have some stake in the same physical location. All this means that any development company that wants to enter this emerging field would have to include a very effective legal team that would help it navigate the ownership issues.

But, these are obstacles that can be overcome if the potential rewards are substantial. Currently, it seems that the potential of enhancing the stadium experience and adding the possibility of on-site BTC betting would undoubtedly provide some great chances for making a big profit.