Opinion Gene Simmons of Kiss believes in Bitcoin – should others as Well? 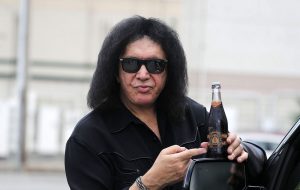 The world of celebrity cryptocurrency promotes is a complex realm. The changes inside of it often coincide with the overall strength of the crypto markets. When they are going up, celebrities of all calibers come out in their promotional roles.

When the times are not that good, it is not rare for the same celebrities and semi-celebrities to pull back and declare any previous support void or even fraudulently obtained. In any of these types of the celebrity support case, there is money involved and it usually comes directly from the venture that is supporting this crypto venture, or even one that created it. However, at the same time, there are those who put their support behind some crypto product only because they actually believe in it.

This might seem strange in the bitterly monetized world of the present, but the cases in real life show this does happen even in the celebrity domain. One of these is Gene Simmons of the rock band Kiss. His example is interesting because it points a spotlight on the wider issue of support for a particular cryptocurrency and crypto domain in general.

Gene Simmons is not precisely a man that has not been known for hype. From his stage presence to his personal life, he was and continues to be involved with many different things. The same goes for the promotion he provided to the different businesses over the years – their number has not been small. However, Simmons believes that he has strict standards for this.

First and foremost he is looking for a clear emotional connection between him and the same venture. Among these, there is one that otherwise might not be that expected – bitcoin. Simmons is apparently involved with the cryptocurrency which he likes and he has not been scared by the crypto winter in which it finds itself along with the rest of the crypt scene. He was present at a recent event targeting the crypto market along with other wealthy investors. Simmons has a net worth of about $300 million and as a co-founder of Kiss, the same portfolio keeps getting bigger.

On the event, speakers included Anthony Pompliano, the co-founder of Morgan Creek Digital. He and Simmons spent some time after the event and the rock legend tweeted after that a bit about bitcoin. He said that this cryptocurrency is volatile, but that people thought many times it was dead, only to see it brought back to life with a bigger price.

Simmons Empire and the Kiss Nation

This musician might be most famous for his role in the Kiss band and its long history, but he is also an entrepreneur and businessman in his own right. Over the years, the Kiss brand was able to generate over $3 billion in related revenue. However, Simmons was always willing to point out to the huge piece that the US government took when it came to this money.

In an interview, he stated that he believed in capitalism but that he had issues with the US brand of the same economic approach. According to Simmons, he is all about supply and demand, but that he does not believe that the government should overextend their influence into the rise and all of some elements of the economy. This shows a libertarian mindset and one that would easily get behind the decentralized nature of the cryptocurrencies.

Even before the age of cryptocurrencies, Simmons was one of the founders of the idea of the Kiss Nation. This group of fans was gathered around the love for the band and not separated by borders, politicians or any other nation than the Kiss one. The philosophy was able to generate much of those $3 billion but also provide a glimpse into a business venture that is tightly connected to both the band and the fans themselves, and as disconnected to the wider system as possible.

Simmons was also always willing to think outside of the box when it comes to investment and diversifies his portfolio in ways that include the new and fringe industries Today, these are mainly digital like esports or social media (which are not even fringe anymore) but also other brick and mortar businesses. He has his own line of a soft drink called MoneyBag Soda. He is also the phase of a medical marijuana company in Canada called Invictus MD Strategies. The same goes for cryptocurrencies as well. In 2017 he discussed the bitcoin’s uncorrelated nature when compared to other tradable assets.

Even then, like many others during the crypto boom, he because interested in getting a piece of this, as he put it, investment puzzle. That year, bitcoin was generating returns as high as 400 percent, while even the most successful stocks are giving back barely double-digit values to their investors. Simmons also expressed interest in working with the cryptocurrency developers to create a Kiss coin, which is something that many other musicians have been discussing for years now. Finally, while he might not have confirmed this, it seems almost certain that he has some direct cryptocurrency investment himself, likely in bitcoin.

There are plenty of things Simmons got right about his stance on bitcoin. Of course, it is plain to see that he is also interested in using some of that information and experience into something like Kiss coin, but this is not a conflict of interest. As a libertarian-minded person, he sees the potential and promise in bitcoin that all supporters see. This is what allows the same venture to continue year after year, in spite of its volatility and market fluctuation.

Simply put, it has intrinsic value behind it and more and more people accept it as the years go by. Naturally, in terms of price and its inventor potential, no one can say when or how profits might arise. No one can at the same time deny that people will lose money on the same account steadily in the future as well. But, Simmons is absolutely right to believe in bitcoin and crypto as a whole – it is here to stay and its impact on the world is not going anywhere soon.