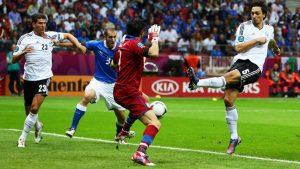 Sweden and Germany played their first match back in 1911. Germany won 4-2. Since then they played another 35 times and since it’s too many to list, here are the last six:

Germany has recorded 15 wins, Sweden 13so 8 games have finished with a draw. However, the last time Sweden have beaten Germany was in 1978, 40 years ago.

Mexico made shockwaves by beating Germany on Game Day 1 in Group F four days ago. It’s only the second time in their history the Germans lost an opening game, the last time in 1972. Still, we shouldn’t be too surprised as this is the third World Cup in a row where the reigning champions lost their opening games.

The game against the Koreans was the first win for the Swedes on opening day since 1958. During that time they had lost two and drawn five games.

Can Germany handle the pressure?

Definitely! Germany might have well underestimated the Mexicans in the first game. There is no chance that will happen against Sweden.

Germany have a great track record in the past years in the games which matter. This was the first match they had lost in the World cup since 2010. Odds are they will come back against Sweden and show why they were champions in 2014.

Can Sweden send the Germans home?

Statistics can sometimes show a grim picture. Sweden haven’t scored a goal in open play in 430 minutes. And they missed a lot of good opportunities against South Korea. One goal in four games, and from the penalty spot, is no sign of goal scoring confidence.

Sweden is a well-organized team who won’t be run over. If they finally manage to find some scoring magic on Saturday, they will be accessories to one of the greatest upsets in World cup history and send Germany packing.

I bet you didn’t know

If Mexico, as it’s expected, beats South Korea, both teams will know they are fighting to stay in the World Cup. As it stands a draw will send Sweden into the 1/8 finals, either as group leaders or 2nd placed depending on how they do against Mexico.

Nevertheless, history is on the German side. What may worry the Swedes is that they haven’t scored from open play in four games now, the three games prior to the World Cup and against South Korea. Germany also won once in the six matches before the World cup. But they were all friendlies.

This can turn out to be a complicated group if three teams all register two wins. But at this stage, Germany is most likely to at least put one on the board. The rest will be decided later.