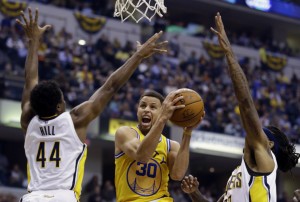 Golden State Warriors will be looking to bounce back from a 116-108 loss to Houston Rockets when they welcome New York Knicks at their Oracle Arena. The title holders aim to cement top position in the Western Conference, but Knicks should not be written off just yet.

Warriors eager to get back on course

Golden State Warriors are on the right track to clinch top position in the Western Conference, but the season is quite long and they can’t afford any complacency in upcoming games. Following four consecutive wins the reigning champions suffered a 116-108 loss to Houston Rockets at the weekend and, no doubt, they are eager to make amends for the defeat. Kevin Durant has overcome his minor injury and all eyes will be the former Oklahoma City Thunder ace when Warriors face Knicks on Tuesday. Golden State suffered a heavy 125-106 loss to Los Angeles Clippers in their last home game in NBA and they can’t afford to lose yet another match at their Oracle Arena. You should bear in mind that Steve Kerr’s men are after their 17th home win of the season.

The likes of Jordan Bell and Andre Iguoadala are both rated doubtful and the duo will be assessed on the match day. Coach Steve Kerr has no other injury concerns ahead of the visit of New York Knicks.

The 2017/2018 NBA campaign has been a mixed bag for New York Knicks so far. Jeff Hornacek’s men sit in tenth position in the Eastern Conference, meaning that they are still in the race for a place in the play-offs. Knicks head into Tuesday’s clash against Golden State Warriors following a 127-107 loss to Los Angeles Lakers, but they have been producing five performances on the road of late. New York defeated the likes of Dallas Mavericks, Brooklyn Nets and Utah Jazz in January, speaking of away games, but they will have a much bigger fish to fry against the star-studded NBA champions. Carmelo Anthony, who left the team in the summer, has not been sorely missed this term and a man to watch in the away team will be Latvia international Kristaps Porzingis, who has been averaging 23.3 points this season. Anyhow, New York Knicks are not regarded as good travelers and it has to be noted that they have already suffered 17 defeats on the road this season.

Coach Jeff Hornacek has no fresh selection worries ahead of the trip to Oakland and he is unlikely to make changes to the starting line-up.

David faces Goliath at Oracle Arena on Tuesday evening and seeing that the hosts are determined to return to winning ways in NBA, we are tempted to put our money on Stephen Curry and Co. New York Knicks have been struggling on the road this term and they are unlikely to shock Steve Kerr’s charges.