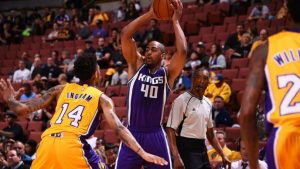 High-flying Golden State Warriors will be aiming to extend their winning streak to six games when they take on Sacramento Kings at their Oracle Arena. Dave Joerger’s men have little to play for in the remainder of the season, but their pride will certainly be at stake in Friday’s clash in Oakland.

Five in a row

Golden State Warriors are on the right track to secure top position in the Western Conference. In Kevin Durant’s absence Stephen Curry and Klay Thompson have been playing key roles in Steve Kerr’s team and the “Splash Brothers” are likely to pose a big threat for shaky Kings defence in Friday’s game at Oracle Arena. The last season’s runners up are eager to extend their winning run to five games and a victory over Sacramento would see them move one step closer to clinching first place in their conference. Golden State rolled over Milwaukee Bucks (117-92) in their last home in the league and it has to be noted that Stephen Curry scored 28 points (4 assists) in the victory over Jason Kidd’s team.

Andre Iguodala has joined Kevin Durant in the recovery room, but the former Denver Nuggets small forward should be back on the court soon. Coach Steve Kerr has no other fresh injury worries ahead of Friday’s clash.

No Cousins, no party

Sacramento Kings chiefs made a pretty strange decision when they let key player DeMarcus Cousins join New Orleans Hornets. Boogies Cousins has been sorely missed in 2017 and it no surprise Sacramento have slim chances of booking their place in the Western Conference play-offs. Kings are on a three-game losing run ahead of the trip to Oakland and the lack of confidence could prove to be the team’s biggest problem in Friday’s game against Golden State Warriors. Dave Joerger’s charges recorded only one win in previous six away games in NBA and they are regarded as big underdogs in the Oracle Arena clash. New signing Buddy Hield has been in a fine form of late and he has been averaging 14.4 points in last ten games. Sacramento Kings recorded their last win at Oracle Arena back in 2013 and, taking everything into account, they are unlikely to upset the Western Conference leaders in Friday’s showdown.

The likes of Kosta Koufos and Ty Lawson were rested against Milwaukee Bucks, but the duo should play some part against Golden State Warriors. Malachi Richardson is a major doubt (hamstring), whilst Rudy Gay is out for the season.

David faces Goliath at Oracle Arena. Golden State Warriors have found their best form of late and they are likely to give fans yet another reason for celebration on Friday evening. Sacramento Kings, on the other hand, are low on confidence and I believe that they are going to return home empty-handed. Kevin Durant’s absence doesn’t seem to be a big problem for the hosts and they are widely expected to extend their winning run to six matches.