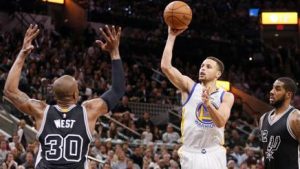 Last season’s runners-up Golden State Warriors kick off the new NBA campaign with a match against San Antonio Spurs. Steve Kerr’s men are considered favourites on paper to emerge triumphant in Tuesday’s game, but Spurs should not be written off just yet.

Golden State Warriors failed to defend their NBA trophy last season, with the team losing to Cleveland Cavaliers in the finals. As a result, the club owners decided to reinforce the squad in the summer and, no doubt, NBA star Kevin Durant is the biggest name that joined the team. All eyes will be on K.D. when Golden State take on San Antonio in their opener, but Klay Thompson and Stephen Curry are still considered the fans’ favourites. Zaza Pachulia is yet another new signing and he will certainly give 100% to produce a fine performance on his Warriors debut. Golden State are a real force to be reckoned with at home and it has to be noted that they outplayed Portland Trail Blazers in their final warm-up game at their Oracle Arena.

Coach Steve Kerr has no fresh injury worries and he can count on all of his key players for the San Antonio clash, but Damian Jones is likely to miss the match with injury (pectoral).

Can anyone replace Timmy?

San Antonio Spurs failed to impress in the 2016 NBA playoffs, with the team suffering a 4-2 loss to Oklahoma City Thunder in the Western Conference semis. Legendary center Tim Duncan played his last game for the team against Oklahoma and many people believe that Timmy is going to be sorely missed in the 2016/2017 NBA season. Serbian giant Boban Marjanovic moved to Detroit Pistons, but Spanish ace Pau Gasol joined the team in the summer. Kawhi Leonard will be the man to watch in the away team in Tuesday’s derby against Golden State Warriors, but experienced guard Manu Ginobilli, who impressed at the 2016 Summer Olympics is capable of posing a big threat for Steve Kerr’s troops as well. San Antonio were beaten by Golden State at Oracle Arena in previous three meetings between the two teams in NBA and it remains to be seen if Gregg Popovich’s men are capable of putting an end to the negative trend. Spurs outplayed Houston Rockets 114-99 in their preseason final.

The likes of Dedmond, Laprovittola and Ginobili did not enter the court against Houston, but they are likely to play some part in Tuesday’s clash against Golden State Warriors.

Golden State Warriors are determined to regain the NBA title and, no doubt, Kevin Durant will quickly adapt to the new surroundings. Warriors were impressive at home last season and considering that San Antonio Spurs are not regarded as good travelers, home win appears on the horizon.