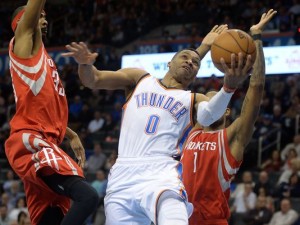 Oklahoma City Thunder begin preseason with a game against their old rivals Houston Rockets. Thunder feel like a championship team, but they will have to prove their worth on the court.

Oklahoma City Thunder failed to impress in the NBA last season, with the team suffering a loss to Houston Rockets in the play-offs. Billy Donovan is still in charge of the team, but he will have more high-profile players to choose from in the upcoming season. Indiana Pacers ace Paul George and New York Knicks superstar Carmelo Anthony, who joined the team in the summer, are likely to help Thunder improve their game, but Russell Westbrook, who was averaging 31.7 points per game last season, remains the team’s key player. Anyhow, Oklahoma City Thunder bosses have big ambitions for the 2017/2018 NBA campaign and they surely want to start preseason with a victory over Houston Rockets. Oklahoma are hungry for revenge and they are widely expected to leave their hearts on the court in Tuesday’s clash against James Harden and Co.

All eyes on Paul – Harden duo

Houston Rockets did remarkably well to reach the Western Conference semis last season, but San Antonio Spurs proved to be a big catch for Mike D’Antoni’s men. Anyhow, Rockets enjoyed a very successful season and they now aim to cross at least one hurdle more in the 2017/2018 NBA campaign. The club owners reinforced the roster in the summer and new player Chris Paul is likely to play an important role in Mike D’Antoni’s team this term. Houston take on Oklahoma City Thunder in the opening game of the preseason and Tuesday’s clash could be a significant hint of what is to come in the Western Conference. Rockets eliminated Thunder in the play-offs last season and that is surely giving fans a reason for optimism ahead of the trip to Oklahoma. In their last meeting in NBA Houston Rockets recorded a 105-99 win over Oklahoma City Thunder, with James Harden scoring 34 points for Mike D’Antoni’s troops and “The Beard” will be the man to watch in the away team in Tuesday’s “friendly game”.

Cameron Oliver is sidelined with a hand injury, whilst P.J. Tucker misses the game through a hamstring problem.

Oklahoma City Thunder have never been stronger, but they will be without star player Russell Westbrook in Tuesday’s game against Houston Rockets. Oklahoma obviously suit Houston and seeing that Rockets defeated Thunder in seven of their previous eight meetings in NBA, I am tempted to put my money on the away team this time out.