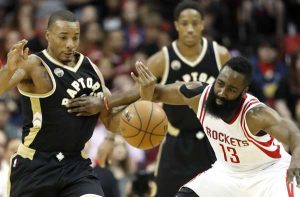 High-flying Houston Rockets will be looking to record their seventh straight victory in NBA when they take on Toronto Raptors at their Toyota Center. Raptors aim to bounce back from a loss to Boston Celtics and an interesting encounter is on the cards.

Over the years Houston Rockets have established themselves as one of the best teams in the Western Conference. Rockets have big ambitions for the 2017/2018 NBA season and they seem to be on top of their game at the moment. Thanks to a 118-95 win over Indiana Pacers Mike D’Antoni’s men extended their winning run in NBA to six games and, no doubt, they are brimming with confidence ahead of Tuesday’s clash against Toronto Raptors. James Harden led Houston to the 118-95 win over Indiana with 26 points and 15 assists and all eyes will be on “The Beard” when Rockets face Raptors at Toyota Center. Eric Gordon has been in a fine form of late as well and the 28-year-old player, who is averaging 22.9 points per game this season, will be yet another man to watch in the home team.

First-choice point guard Chris Paul remains in the recovery room, alongside center Nene Hilario. However, coach Mike D’Antoni has no other selection worries ahead of the visit of Toronto Raptors.

Toronto Raptors have been having their ups and downs at the start of the season. The Canadian outfit have recorded seven wins in the 2017/2018 NBA campaign to date, while suffering five defeats. Raptors head into Tuesday’s game against Houston following a 95-94 loss to Boston Celtics, but it has to be noted that they could have won the match. DeMar DeRozan missed a turnaround jumper with two seconds left, but you should bear in mind that he scored 24 points in the defeat to Celtics. Raptors aim to return to winning ways and the fact that they defeated Rockets in their last meeting at Toyota Center is certainly giving fans a reason for optimism. Unlike DeMar DeRozan, fellow superstar Kyle Lowry has been struggling to find his best form at the start of the season and he has no more than 13.4 points per game. Anyhow, given Houston’s terrific form, Toronto face an uphill task in Tuesday’s showdown and they will have to be at their sharpest in the Toyota Center clash if they are to beat Rockets.

Norman Powell is a major doubt and he will be assessed on the game day. Coach Dwane Casey has no other injury concerns ahead of the game.

Despite the fact that Chris Paul is sidelined with injury, Houston Rockets have been producing scintillating performances in NBA of late. Mike D’Antoni’s men are a real force to be reckoned with at home and seeing that Toronto Raptors often struggle on the travels, home win should be considered.