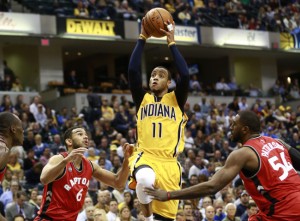 DeRozan’s less Toronto Raptors outclassed Milwaukee Buck on Tuesday and they will be looking to build on the triumph when they take on Indiana, who head into the Bankers Life Fieldhouse clash following a hard-fought win over Boston Celtics.

Indiana eyeing a place in the play-offs

Indiana Pacers have been in a fine form of late. Frank Vogel’s men recorded four wins in previous five games and they are on the right track to book their place in the Eastern Conference play-offs. Indiana occupy sixth place in their conference, but they can’t afford any complacency in the remainder of the regular season if they are to retain their spot in top eight. Pacers failed to impress against Boston Celtics on Tuesday, but they defeated Brad Stevens’ men at their Bankers Life Fieldhouse. As expected, Paul George led the team to the 103-98 win over Celtics and he will be the man to watch in the home team in Thursday’s clash against Toronto Raptors. Frank Vogel’s troops have been producing fine performances at home this season and it remains to be seen if they are capable of recording their 21st victory at Bankers Life Fieldhouse.

Ty Lawson missed the Boston game with injury (left foot) and he remains in the recovery room. The likes of Robinson III and Whittington did not play against Celtics, but the duo could return.

No DeRozan, no problem

Toronto Raptors suffered a shocking loss to hit-by-injuries Chicago Bulls in their last NBA home game, but the team quickly recovered from the 107-109 defeat. Despite playing without DeMar DeRozan and Jonas Valanciunas against Milwaukee, the Canadian outfit did well to crush Bucks on Tuesday evening (107-89), with Lowry scoring 25 points on the night. Toronto are enjoying a very successful season and they are on the right track to clinch second position in the Eastern Conference. Seeing that both DeRozan and Valanciunas should return against Indiana, no doubt, the visitors are capable of recording their 46th victory of the season. Raptors are eyeing their 20th win on the road, but it is well known that the team produce much better performance at their Air Canada Center (26-8). DeMar DeRozan is averaging 21.77 points this season and he is likely to pose a big threat for Pacers after he was rested in the 107-89 victory over Milwaukee Bucks.

Jonas Valanciunas should recover in time to face Indiana Pacers, while aforementioned ace DeMar DeRozan returns to contention as well. Dwane Casey has no other selection worries ahead of the trip to Indianapolis.

Toronto Raptors produced a thrilling display in the victory over Milwaukee Bucks and seeing that two important players Valanciunas and DeRozan return to the starting line-up, I believe that away win should be considered in this one. Indiana suit Toronto and, taking everything into account, the visitors are likely to emerge triumphant in Thursday’s match at Bankers Life Fieldhouse.

Pick: Raptors to cover the spread