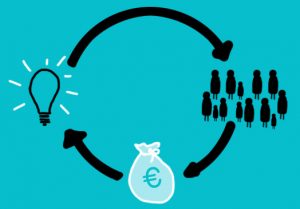 One of the key hallmarks of the modern age or more specifically, the current decade of the 21st century is the concept of crowdfunding. As a simple but brilliant idea, the system of gathering funds using online platforms where individuals can contribute with the purpose of supporting a common goal affected practically all fields of industry, but also many other domains. Today, the most popular crowdfunding platforms are utilized daily by millions of users, with a huge number of monetary transactions take place in almost every big traditional currency in the world.

In many ways, BitCoin network shares so much with the crowdfunding idea. As a peer-to-peer network, it works on the principle of the blockchain system that enforces a distributed ledger across all of the participants of the network. Like crowdfunding, it depends on a combination of a willingness to participate in something that is perceived as generally good and desirable by the engaged party, but also the idea that the participants get something in return for their effort.

For BitCoin mining, this return is BTC that they produce in the process. For crowdfunding, the same return comes in the form of perks, finalized products, and many more alternatives, all of which reward the funders in some shape or form. But, in spite of the multitude of things they have in common, BTC is not a widely used currency for any crowdfunding process.

In fact, it could be easily argued that the BitCoin participation in the crowdfunding scene is minimal. Here are the reasons for this state and also some alternatives that could aid in the process of changing this.

The Drawback of a Small Market

For an idea like crowdfunding to work, it demands a substantial presence of individuals who are willing to provide a campaign with their money. Naturally, not everyone will be interested in every possible fundraiser, but with a big enough market, an ecosystem should gradually form where individuals generally support the things that might interest them, like video games, movies, E-Sports, novels, humanitarian actions or anything else.

But, if this market of willing individuals is small, the crowdfunding process has a lot smaller chances of being successful. Even if for some reason, everyone who decided to participate in this small market invested a bigger amount of money than their counterparts over at the traditional platforms, it still would not compensate this handicap. The reason for this comes from the element of crowdfunding which rests upon social networking and the ability of a project to gain exposure through donors as well as the funds themselves.

Currently, BitCoin does not possess a large enough base of users to make crowdfunding projects successful at anything near the rate of the fundraisers that employ regular currency. But, the benefit of an emerging user base is that bolder projects could stand a better chance of being noticed if they decided to take donations in BTC. Some are already doing this, but the overall system is still a lot more inclined (some would say completely inclined) towards the traditional currencies.

Also, it is important to note that the BitCoin digital wallet holders represent a constantly growing population and the same trend shows no signs of stopping. In fact, there are plenty of reasons why many people, both ordinary users who employ BitCoin for online gambling and similar activities, but also developers and investors, have big hopes for 2016. If this is the year when the user base of BitCoin expands rapidly, a crowdfunding solution should be in place to catch the wave of new potential chances for this process to get really on its feet.

Blockchain as a technology provides a fantastic environment for a system of donations and with it, BitCoin stands a chance of entering the crowdfunding domain. The main advantage is located in the digital currency’s ability to come is so many shapes and forms from the perspective of a regular user.

For example, instead of making a donation to a charity that works on a cure for a certain type of illness, they could say that 0.01% of every BTC transaction goes to the same organization. A time-limited crowdfunding process could use BTC and set up a predefined amount that is donated to be slowly siphoned off over a course of a year.

Another big option could be BTC automated trading funds which could be put in place to constantly generate money which is not being utilized. While the traditional banking system offers a range of cumbersome option, BitCoin can replace all of these with speed and effectiveness without the loss of profits. With a system like this, charities could create safe trading funds which could generate them a passive income continuously.

A blockchain system will allow all of this and many other variations of the donation process. With this, any fundraising or crowdfunding project could be seamlessly merged with the so-called patron mechanism. This way, the difference between a one-off donation and a continuous process of financial support would simply blend into one platform solution. In theory, the projects could be placed on an independent blockchain system where the network would support the parties collecting the money while the BitCoin connection would allow for the influx of BTC funds.

As always, blockchain provides the infrastructure for a huge number of applications and crowdfunded is definitely one of them. With a series of ongoing solutions being developed right now, there is a big chance that anyone will be able to get an adequate blockchain network in the immediate future.

Infusing a true blockchain solution that is supported by BitCoin into the crowdfunding scene will not be an easy task. One of the main hurdles will be the notion that most people believe that traditional crowdfunding already provides the best possible solution. Here, a skeptical outlook on BitCoin and its future might deem it too unstable for it to leave a mark.

Luckily for BitCoin, its sheer presence, flexibility, and functionality are the best tools to combat this type of negative stance. For crowdfunding, the biggest obstacle will be starting a project like this off the ground and finalizing it successfully. Currently, it is much more likely that one of the big crowdfunding platforms will include BTC in the list of potential currencies.

But, for the BitCoin to make an impact on the same domain, it should be perceived both as a digital currency and blockchain solution. When the same two become entangled in the process of gathering funds, the really big change will occur.