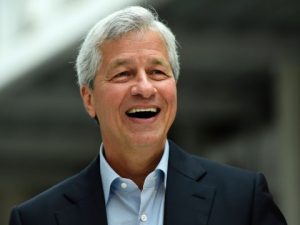 While the cryptocurrency domain is picking up the pace when it comes to acquiring celebrity supporters, there is a trend of it getting its big celebrity opposes. While digital currencies always had their naysayers, often for good reason, the newest addition to this group comes with a lot of leverage and media influence.

The person in question is Jamie Dimon, the CEO of JPMorgan Chase bank who recently stated that the bitcoin was a huge bubble that will burst at any moment. He also said many other negative things mainly about the BTC network but his tirade included a broad condemnation of all cryptocurrency ventures. In fact, Dimon when so far as to say that he would personally sanction any one of his employees for trading in digital currency. For him, this act personifies two problems – its undefined legality level and the sheer fact that Dimon thinks of it as something that does not work as an investment.

Of course, the digital currency domain, but also the field of blockchain have stood up against the same arguments, but some claim that the rebuttal was nowhere big enough as it should have been. Now, Dimon is once more at it, this time with his explanation why digital currency is such a dangerous thing for its users. Here is the content of his new message and also point by point response to all of the issues he did bring up related to digital currency.

A Venture that will end Badly

Talking to the CNBC, Dimon took the opportunity to expand further his criticism of bitcoin and provided a stark warning that the venture will end badly for those involved in it. It appears that Dimon is taking the new opportunities that have come about after the first scalding interview on the future of bitcoin. It seems that the follow-up media appearances keep the same talking points.

This time around, he expressed his concerns not only about bitcoin, but also ethereum and ICOs, saying that he believes that the governments will soon descend on the same phenomena with restrictive regulation. Of course, this is a strange and sort of retroactive prophecy, being that the same thing already occurred in China, the most relevant nation when it comes to digital currencies.

However, he did take the issue into darker waters. He predicted that the same eventuality will not be pretty, saying that the authorities, apparently through the world, will begin threatening users of digital currency with jail time.

This, in turn, will lead the cryptocurrencies to move onto the black market. CNBC failed to inquire which further apocalyptic elements will this scenario include, but there is a strong sense that Dimon would be capable of going further than this in his doomsday predictions.

The Novelty and Cryptomarkets

Dimon believes that the biggest protective element cryptocurrency markets have which is shielding them from harsh regulations is their novelty factor. He thinks that people still tend to think of them as neat and interesting. But, as they grow, he believes that the governments will be forced to close them down in some shape or form.

Dimon took a similar stance when he was interviewed by the Economic Times of India. On this occasion, he said that he did not believe that the problem lies in government-issued cryptocurrencies. He thinks that the world still has digital currency when the fiat is taken to the digital domain and he stated that he is not against this form of blockchain application.

But, worryingly, Dimon once again reiterated that his problem is the fact that digital currencies “make money out of thin air”. He thinks that right now, governments are observing digital currencies and see them as a novelty, but as the number of users grows, the novelty factor wears off. The same statements which were made in the early September included the CEO calling bitcoin a fraudulent enterprise, inspite of many mainstream investments in it.

This landed him in some hot water when it comes to the digital currency domain. Right now, the same hot waters are being formalized as a Sweden’s company called Blockwater accused Dimon of spreading misleading and false information. In the area of the regular stock market and currency trading, this is a punishable offense and it will be interesting seeing how the Swedish courts react to this accusation.

Dimon is a perfect example of a growing trend in the social sphere surrounding the digital currency. On one hand, he and many other people who can be called traditional financial market participants, see that others are generating money through these ventures.

When they do, their old instincts kick in and they also begin to explore what do digital currencies actually do, most likely looking for their own chance of earning money. However, they attain the shallow knowledge on it that does nothing more than trigger their alarms for things like pyramidal ventures.

This is how the basic lack of understanding which comes from saying the digital currencies creates money from thin air come from. The actual reality is very different – digital currency is generated by computing power or hashing that both support its transactions through a shared ledger and which calculates new coins.

Essentially, digital currency is a monetary representation of the invested energy and its daily price has nothing to do with this basic truth. This is why allows millions to use it to purchase services and goods, visiting online casinos that even cover eSports and do plenty other things with digital currencies.

A Desire to Stay in the Dark

In this particular case, the lack of information Dimon has must be correlated with the rest of his life and surroundings. As a wealthy and influential CEO, it is hard to believe he lacks the means to properly inform himself. There is not a chance that Dimon did not have anyone to properly explain this to him, so an unwillingness to understand must be the reason for this outlook.

Speculating what is the end goal of both being in the dark and readily talking about things you do not understand is very problematic. But, it is hard not to be jaded about the whole setup, knowing what his company otherwise stands for – believing that Dimon is a person who just cares about his fellow men but is uninformed is an exceedingly bitter pill to swallow.