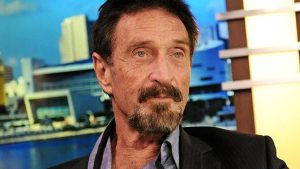 The world of digital security has a few names that left a lasting marked the industry, but arguably none of them have the same weight as John McAfee. As a maverick and true veteran of the field, McAfee has spent an ample amount of time in the headlines, often for a combination of strange and worrying reasons. Now, however, the news is that he added two BitCoin heavyweights to his company’s new advisory board.

The move comes as his company MGT Capital Investments tries to move deeper into the digital currency business. Now, it launched a Cryptocurrency Advisory Board dedicated to the same domain. The board chairman is Roger Ver, a BTC angel investor, while Erik Voorhees, an industrial entrepreneur who is also tightly connected to BitCoin was named an inaugural member of the same board.

Today, most banks, but also other financial institutions are trying hard to enter the domain of blockchain technology. The reasons for this are that this tech provides a larger transparency, but also a lot more efficiency to the transfer of monetary assets. But, McAfee believes that the same field will soon provide its users with potential safety issues and exploit fears, which is why he is creating the division that will be soon launched with the primary purpose of making blockchain more secure against all digital threats.

There is a huge potential in blockchain for many different purposes aside from finance like the recent NATO competition showed. But, the problem is that no one can truly tell what the potential vulnerabilities are. For now, creating an analysis of the current BitCoin network seems like the only option.

Additional cryptocurrency P2P networks could also be taken into consideration, but this still would not provide a realistic estimate what should be expected from blockchain as a potential problem in the upcoming years. For people who, for example, use BitCoin to bet online, the current security is more than enough. But this need will change.

The main stumbling block for any type of projection when it comes to this issue is what exactly should be assessed. As big companies, financial institutions and even national banks go into the development of their own blockchain solutions, the list of threats will likely rise as individual network come online. In theory at least, the blockchain approach should provide a system-wide security through its constantly authenticating process that is both decentralized and wildly redundant (which is also a security feature).

But, as the tech industry has clearly shown over the last several decades, exploits are always there and it is just a question of time and effort to find them. Often, the same workarounds come in a completely novel ways that no one had foreseen beforehand and there is little doubt that this trend will repeat itself with blockchain.

Here, another problem for the upcoming networks is the potential payoff that will come from breaking into them. On one hand, there will be the direct financial benefit of accessing banking blockchains. On the other, valuable information about the pontifical exploits of the networks will be a sought-after commodity on the digital black market. That is why any new blockchain can expect to be targeted as soon as it enters the operational phase. McAfee obviously sees a big chance for this company and its new blockchain-specific division.

According to McAfee, the blockchain is very insecure from a “hacking standpoint”, as he phrased it. He believes that the same process is his specialty and that his specific knowledge will be useful for treating the issues before they can turn into huge calamities. He also believes that the tech offers secure ways to verify transactions, but that the recent incidents, like the hack of ShapeShift, a cryptocurrency exchange, as well as the case of Mt Gox show that even the top players are more than open to attacks.

Also, like with the FBI iPhone story that broke after the San Bernardino attack, McAfee took the chance to turn the focus of the conversation to the smartphones. This time as well, his point was that an insecure device can be accessed along with everything on it.

He said that he was petrified that people use their smartphones as their digital wallet devices. With 10 minutes with a device like that, McAfee is certain that he could have all of their money. While claims like this are classical McAfee, there is still a valid point that they landscape for financial cyber-attack became a lot wider with the BitCoin and digital wallets.

Since he became the CEO and the chairman MGT Capital in May 2016, the same news brought about a big surge in the company’s stock value. However, the company, former a fantasy sports venture, is actually a rebranding enterprise that came into its current shape with the arrival of McAfee.

But, because of his history, the move began to create quite a buzz inside of the blockchain and cryptocurrency industry. Since his founding of the McAfee Associates almost 30 years ago, he has become synonymous with anything related to online security. In 2010, McAfee Associates were sold for $7.6 billion to Intel.

Now, with MGT, McAfee direction seems clear, but his members of the board seem to be less informed or aware of the company’s mission. This includes Ver believing that the meetings of the board will take once in a quarter, with only several decisions per year to be made.

This provides a slightly different (and less expedient) dynamic than what McAfee suggested. But, the Cryptocurrency Advisory Board will be only a part of the company’s blockchain efforts. An additional department will be focused on the military applications, but also other ventures.

One department will be called the Hacker Advisory Board that should deal with potential cyber threats. However, the exact structure and the issue of overlapping responsibilities (which seem highly likely) was not mentioned in the same explanation provided by McAfee. While many digital ventures, ranging from E-Sports leagues to huge financial systems, often come with a very loosely defined structure, this is not expected from online security companies.

A (Side) Step in the Right Direction

There is no doubt that blockchain industry has to think long and hard about its vulnerabilities and potential defenses. But, McAfee seems like a person which a big part of the blockchain community would not exactly want in their midst. Regardless of this, the security expert seems to be completely invested in this domain for now.

As the more precise efforts of MGT are presented to the public, it will become more apparent if McAfee really has to offer something to the community, or was the whole process only a beefing-up of the company’s trading value.