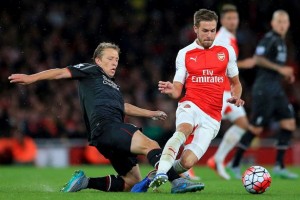 Arsenal will be looking to strengthen their grip on the top position in the Premier League standings when they take on Liverpool at Anfield on Wednesday evening. The Reds have been having their ups and downs of late, but Jurgen Klopp’s men are definitely capable of matching Arsene Wenger’s troops on their day.

Seeing that Jurgen Klopp has been having a number of injury worries of late, Liverpool have been producing decent performances over the last few weeks. The Reds are on the verge of booking their place in the Capital One Cup final, but, on the other hand, the team suffered a 2-0 loss to West Ham United at Boleyn Ground in their last league game, which seriously damaged their UEFA Champions League hopes. Liverpool must run out of the complacency they showed against the Hammers, but Wednesday’s game against league leaders Arsenal will be anything but a walk in the park for the Anfield outfit. Jurgen Klopp’s men have already defeated the likes of Chelsea and Manchester City in the 2015/2016 Premier League campaign and that is certainly giving the fans a reason for optimism ahead of the high profile encounter. Anyhow, given that a number of first-team regulars have joined Liverpool’s injury list, I do not believe that there is a big value in betting on the Reds.

Danny Ings, Divock Origi, Philippe Coutinho, Dejan Lovren, Joseph Gomez, Martin Skrtel and Jon Flanagan are all sidelined with injury, but Mamadou Sakho should be fit to face Arsenal. Jordan Ibe has overcome his injury as well, whereas Daniel Sturridge is unlikely to be risked.

Gunners eager to turn their title dream into reality

Just like Liverpool, Arsenal have been struggling with injuries this season, but despite the fact that Santi Cazorla and Alexis Sanchez missed previous six league fixtures, the Gunners have been producing fine performances in the national championship of late. The capital club did well to bounce back from a heavy 4-0 loss to Southampton at St. Mary’s and the league leaders will be aiming to build on back-to-back wins over the likes of Bournemouth and Newcastle United when they square off against Liverpool in Wednesday’s Premier League derby. Mesut Ozil was rested in Saturday’s FA Cup game against Sunderland, but he returns to the starting line-up and, no doubt, all eyes will be on the former Real Madrid man when the two sides take on each other at Anfield. Olivier Giroud has been scoring goals for fun of late, meaning that the opposition defenders will struggle to keep him at bay.

Jack Wilshere, Santi Cazorla, Alexis Sanchez, Danny Welbeck and Tomas Rosicky remain on the sidelines, but Arsene Wenger has no fresh injury worries ahead of the game. Aaron Ramsey, Mesut Ozil and Nacho Monreal all return to the starting line-up.

Arsenal arrive at Anfield with genuine title hopes and I am positive that the Gunners, who won their last Premier League trophy back in 2004, will go for a victory in Wednesday’s derby. Liverpool head into the clash with a severely-weakened squad and seeing that they are already out of the title race, I am tempted to back Arsene Wenger’s troops to record a win that should help them cement the top position in the standings.