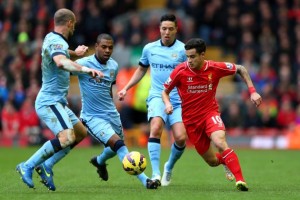 Liverpool and Manchester City, the two title-chasing teams, face each other at Anfield in Saturday’s festive fixture. Both sides have been in a fine form of late, meaning that a lively contest appears on the horizon.

Yet another must-win game

Jurgen Klopp is on the right track to bring glory days back to Anfield, but Liverpool will have to be at their sharpest in the remainder of the season if they are to regain the Premier League title. The Reds are six points behind league leaders Chelsea ahead of Matchday 19, meaning that they face a must-win situation in Saturday’s game against Manchester City. Jurgen Klopp’s charges came from behind to beat Stoke City on Tuesday, with Adam Lallana once again proving his worth. Liverpool have been impressive at home this season and they are certainly capable of beating Pep Guardiola’s troops at their Anfield. Philippe Coutinho remains in the recovery room and in his absence Saido Mane will be the man to watch in the home team. Liverpool are after their seventh home win of the season and you should have in mind that they scored 2+ goals in each of their previous five home fixtures in the league.

Philippe Coutinho, Danny Ings and Marko Grujic are all sidelined through injury, whilst Joel Matip should be recalled to the starting line-up after missing the Stoke City with an ankle injury. Simon Mignolet should keep his place in goal.

Manchester City made a flying start to the season and many people believe that the Citizens would win the Premier League trophy without any difficulties. However, Pep Guardiola’s team suffered a dip in form earlier in December, with the team losing back-to-back games to the likes of Chelsea and Leicester City. However, Manchester City quickly managed to get back on course and they are on a three-game winning run in the national championship ahead of the trip to Liverpool. The Citizens are eager to win the domestic title, but they need to keep on improving their game if they are to meet the goal. Pep Guardiola welcomes Kun Aguero back to the starting line-up and all eyes will be on the Argentine attacker when Manchester City take on Liverpool at Anfield. Unlike previous years, the Citizens have been producing splendid displays on the road this term and they are eyeing their eighth away win in the league.

Both Liverpool and Manchester City have been impressive in front of goal of late. Both sides are determined to win the Premier League title and there is every chance fans will see a real football festival at Anfield. When Liverpool and Manchester City take on each other in the English top flight a high-scoring affair is guaranteed and I am tempted to put my money on over 2.5 goals.