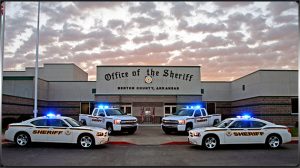 While sounds like a bad Onion headline, the previous news is not a spoof. Instead, it features a single sheriff’s office in the US state of Arkansas that has recently managed to get in the limelight of the digital currency community, but also the mainstream media.

This means that the unlikely information in the headline is true – a law enforcement office in Benton County has begun mining bitcoin. The reason why they are doing this is to allow its investigators to have the resources that can be used in sting operations on the dark web.

While the purpose of this process is very focused and precise, it brings with it many interesting notions about the relationship between the government and non-state-based digital currencies.

The (presumably) small mining setup for BTC that is now up and running in this sheriff’s office is generating cryptocurrency for the purpose of trying to track the online movements of criminals. This pilot program, which was conducted through the Cyber Crimes Division office, plans to focus on digital-first crime ventures. These include, among other examples, the proliferation of pornography featuring minors.

But the plans for this project are not new. In fact, a detective by the name David Undiano from the Benton County Sheriff’s office said in a press interview earlier in October that a pilot was in the works. It was designed to help police officers look into different crimes that have otherwise been outside of their reach due to technical difficulties.

According to him, individuals are using the dark web to sell illicit digital data and do it in exchange for bitcoins, not any direct fiat payments. This is due to the fact that people included in these deals rarely meet face to face. Here, the official credit card of the Sheriff’s office is completely useless.

But, the officers realized that they needed some form of currency accepted on the dark web for illicit dealings. Now, with their access to bitcoins, they have the means to get in touch with the potential criminals and slowly build up their trust until the moment they can make the arrest.

Opposition to the Plan

While the plan is undoubtedly generating a lot of media attention, not everyone is a supporter of the pilot. Instead, some have directly criticized the policy and named several important shortcomings. That is the reason why Glenn Latham, an upcoming sheriff candidate from the same county stated that the plan is wasting taxpayers funds.

According to him, the problem lies in the mining rigs used for attaining BTC. He believes that the power needed for the rigs to run, but also to cool down will be enormous and that the bill for this will not transform itself into a great success for the police officers.

The vector of the attack created by Latham is very politically wise because it steers clear of any moral or legal dilemmas related to the building of a mining rig in a government agency. Instead, it cuts directly to the intellectual place where the voters fully understand the stakes: more money for mining bitcoin, less money for community development (even though this does not have to be the case).

There’s little doubt that many in the county will agree with him, making the project a lot more complicated for the police officers that run it. This is a crying shame, mainly because it shows that the governmental adoption of the BTC or any other cryptocurrency does not have to be a top-down and unified process.

The move by the Benton County’s officers has to be recognized as both smart and practical, which is something all public officials should strive to. What is even more commendable is the fact that they decided to go for a digital currency, something that is still vaguely understood by members of the public, including those who should at least, in theory, have a solid grip on it.

Yet, they managed to acquire the rigs, placed the source code on them, make sure that the AC standards are kept and put them to work. In fact, this might be the first instance where a federally-funded organization in the US started mining for bitcoin outside of the academic setting.

In the upcoming days and weeks, there is little doubt that a more tech-oriented news source will do a detailed story about this mine and the way it is run. With the recent rise in interest related to new mining venture, especially those originating in Japan and its companies’ global ventures, this operation really stands out.

Benton County in Arkansas is not exactly the Nordic landscape that has a double advantage for mining bitcoin – ample energy and naturally cool climate. Instead, the US state features the complete opposite – a relatively weak economy where energy prices will make a dent in the sheriff’s office budget and also a warm climate, means, even more, energy for the AC.

However, this still does not make the project a dud. Firstly, it really does provide the law enforcement with the means of reaching otherwise inaccessible criminals. This means that even if the money has to be invested, the end goal makes it worth it.

A possible chance of doing this without having a mine would be to gain access to some seized bitcoin that the US government is holding. Here the problem revolves around jurisdiction and the ability (or lack of it) to claim or ask for a part of that seizure. This is why the mining rig is the best possible option for a small law enforcement office that wants to get their hands on bitcoin or any other digital currency.

The move, based heavily in the digital domain, will clearly not be accepted by all. This way of thinking is one of those approaches that morph video games in eSports and do many other transformative things. With a dedicated mining rig, a simple sheriff’s office becomes a money-generating nod in a huge government-run system.

But, what if the office puts aside some BTC and then decides to sell it once the price doubles or quadruples at some point. This would add an important secondary use of these mines aside from the primary one. All of this makes the chance that the Benton County sheriff’s office took such an important decision for a government branch.