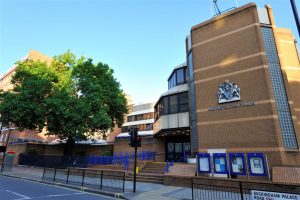 Not so long ago, the cryptocurrency domain was almost instantly associated with shady dealings. A simple mention of bitcoin was enough to make any story something out of a tech thriller, where the bad guys use some new and exotic method of a financial transaction to do their evil work. Since then, the world has come a long way and today, blockchain currencies are even under development of huge banking organizations.

At the same time, the outlook of the mainstream media and the wider public has also shifted towards accepting things like bitcoin but overall cryptocurrency systems as something positive. But, at the same time, this does not mean there are others who are trying to exploit this to their advantages.

In the case of OneCoin, a cryptocurrency that started operating a few years back, the attention of the London police department recently transformed into a full investigation. As the same investigation takes place, the news brought a warranted attention to those who are claiming that they are active in the blockchain community but instead might be selling something illegal.

The announcement came from the London police sources which declared that they began an investigation into this digital currency scheme. Even before this happened, a lot of experts weigh in on OneCoin and labeled it as a fraudulent enterprise.

Initially, OneCoin promoted itself as an opportunity to invest in the digital currency, but now, the UK Financial Conduct Authority (FCA), which is one of the top financial regulators in the nation, also deemed it as a risk to consumers. The same agency is also involved in the process of licensing legitimate blockchain service providers and bitcoin-based ventures.

However, OneCoin tried to market itself as something very similar to bitcoin, but with a single difference. Instead of sharing the BTC decentralized network, OneCoin comes with a very focused approach that includes selling packages for investors and has a completely centralized hub for storage, exchange and transaction procedures.

The wave of criticism became so pronounced that some have even claimed that OneCoin does not exist as a cryptocurrency. Now, the FCA issued a statement that urges the comers who think they might have been scammed to contact the police’s fraud division in London.

More precisely, the statement declared that the OneCoin firm does not have any authorization from them and that they believe it is not undertaking any activities that would require their authorization. At the same time, they were very clear about the risks they believe this company poses to the consumers in the UK.

This situation is not the first clash between OneCoin and national regulators. In July 2016 regulatory agencies in Belgium warned consumers about the company, telling them that it provides misleading and false information.

The same information was coming from the OneCoin supporters or individuals and organizations that were working for or with the firm. Similarly, although there is no official confirmation of this, there is plenty of evidence pointing towards the fact that financial oversight agencies in Bangladesh and Germany are investigating OneCoin.

So, it is clear that OneCoin is something that was on many financial and law enforcing radars for quite some time and now, the action is being taken by several nations at once. But, the OneCoin structure, ownership and reaction to all of this are difficult to gauge because even though the network is very centralizes, the management structure appears not to be.

Unfortunately, this is only one more factor that points towards the idea that the whole process is something that does not have the best interests of the consumers at heart. Also, the investigations are not stopping the OneCoin from its continuation of their business plan, which is currently ongoing in many nations across the globe.

Bitcoin or any other legitimate cryptocurrency does not have to defend its right to stay operational and continue to serve people with possibilities like betting online using BTC. At the same time, it is completely unrealistic to expect the same community to police the blockchain domain and hunt for any potential transgressions outside of their network. But, it appears that this is exactly what some of the elements in the public mind desired.

Following the idea of those who are innocent have to point out the guilty, some might want the veteran professionals of the blockchain concept who work in the FinTech industry to point out those who might be breaking the law. This is fueled by the problem of the misconceptions and clear lack of knowledge on cryptocurrency by many media representatives, even those who follow the financial industry.

It should be in fact their job to scan the domain of the FinTech and point out to those who they believe are doing something wrong. They, with the regulators, are the social drivers that should keep this domain in check. Yet, thanks to the lack of knowledge, it appears that many still want experts from the bitcoin network to go about and try to determine who has a legitimate offer and who is providing a scam.

A Need to Educate

Instead of policing, it is clear that the blockchain community as a whole has to invest some combined effort into providing an easily accessible means of educating the public on these systems. OneCoin, which could very well be a non-existent cryptocurrency, just underlines this need. With a proper knowledge of the key ideas of bitcoin as a manifestation of the blockchain, or any other manifestation for that matter, the public could be able to recognize valid and invalid options that are before them.

The amount of needed knowledge that has to be provided is not great. Ordinary people, or even more tech-oriented individuals like eSports players, for example, do not need to grasp the minute workings of blockchain networks. Instead, they need to have the everyday cryptocurrency common sense that will be useful to them from the perspective of the end users.

Through a simple online educational network of sites, blogs and video lectures, which ask for a minimal investment, the community could create info spots that could save a lot of money by helping the public avoiding shady projects. Additionally, this way, the same community would strengthen its position as a party that wants to improve the FinTech domain for everyone, no matter what is their cryptocurrency of choice.