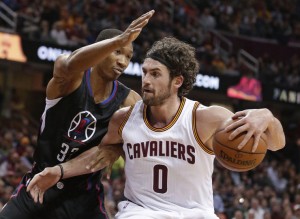 All eyes will be on Staples Center when Los Angeles Clippers and Cleveland Cavaliers take on each other on Sunday evening. Tyronn Lue’s men are eyeing their third consecutive win on the road, but they have a big fish to fry this time out.

In Blake Griffin’s absence Chris Paul has been Los Angeles Clippers’ key player. Clippers lost Griffin on Christmas and it has to be noted that they are 25-9 in the NBA since losing the power forward. Chris Paul, though, helped the team record a 101-94 win over New York City Saturday evening and no doubt he will be the man to watch in the home side in Sunday’s showdown against Cleveland Cavaliers. Doc Rivers’ men aim to overtake Oklahoma City Thunder in third position in the Western Conference, but seeing that Blake Griffin has yet to overcome his injury, I do not believe that home win should be considered this time out. Anyhow, you should bear in mind that Clippers have already recorded 22 wins at their Staples Centre this season, two after over time.

Blake Griffin remains in the recovery room, with Paul Pierce and Luc Mbah A Moute also likely to miss the game. Doc Rivers has no other selection worries ahead of the Cleveland Cavaliers clash.

Cleveland Cavaliers suffered a shocking defeat to Memphis on 7 March, with the team losing 106-103 to Grizzlies who played without four starters. However, LeBron James and Co. quickly recovered from the loss as they outplayed the likes of Sacramento Kings and Los Angeles Lakers in previous two away games. Cavs are eyeing third consecutive win on the road, but Sunday’s game against Los Angeles Clippers will be anything but a walk in the park for Tyronn Lue’s troops. Important player Kevin Love, who is averaging 15.8 points and 10 rebounds this season, is likely to miss the match with injury and he could be sorely missed against Clippers. Anyhow, Doc Rivers’ men should find it hard to contain the “King James”, who scored 24 points in the victory over Los Angeles Lakers. It has to be noted that Cavs, who occupy top position in the Eastern Conference, are eyeing their 20th away win of the season.

Mo Williams and Kevin Love are both out of contention with injury, but coach Tyronn Lue has no other injury concerns ahead of the trip to California.

Seeing that both teams will be without their star players in Sunday’s clash at Staples Center, I do not believe that we will see a high-scoring game this time out. In their last meeting in the NBA Cleveland Cavaliers recorded a 115-102 win over Los Angeles Clippers, but I do not thing that history is going to repeat itself. Doc Rivers’ team conceded under 100 points in five of their previous six home games and, taking everything into account, betting on under 206.5 points seems to be a very good option here.