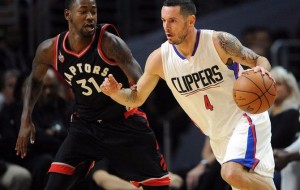 Golden State Warriors will be looking to extend their winning run in NBA to four games when they take on Los Angeles Clippers at Staples Center. Clippers aim to bounce back from a 127-117 loss to Oklahoma City Thunder, but they face an uphill task in Saturday’s game against the title holders.

Los Angeles Clippers have been struggling to find their best form at the start of the season and it is more than obvious that Chris Paul is going to be sorely missed in the 2017/2018 season. Clippers sit in ninth position in the Western Conference ahead of Saturday’s clash against Golden State Warriors, but they have been showing signs of improvement of late. Doc Rivers’ men recorded four wins in previous five league games, but they were outplayed Oklahoma City Thunder (117-127) at home in their last league game. Blake Griffin scored 24 points in the defeat to Russell Westbrook and Co. and, no doubt, he will be the man to watch in Doc Rivers’ team in Saturday’s showdown against Golden State Warriors.

The likes of Austin Rivers, Danilo Gallinari and Patrick Beverley are definitely out of contention with injury, whilst Serbia international Milos Teodosic is a major doubt and he will be assessed ahead of the game.

Over the years Golden State Warriors have established themselves as the dominance force in NBA. Golden State are determined to defend their trophy and they are sitting in top position in the Western Conference ahead of the trip to California. Warriors are on a three-game winning run in NBA at the moment and it has to be noted that they emerged triumphant in each of their previous nine away games in the league. The good news for the fans is that Stephen Curry has overcome his injury, but fellow superstar Kevin Durant could miss the Clippers game with a calf problem. Anyhow, the reigning champions are seen as hot favourites to win Saturday’s encounter and I believe that the visitors are going to prove their worth on the court. The “Golden Boy” scored 30 points (7 assists) in a 124-114 win over Houston Rockets and he is likely to pose a big threat for Clippers in the Staples Center clash.

Kevin Durant is rated doubtful, whilst Draymond Green should recover in time to face Los Angeles Clippers. The likes of Omri Casspi (mid back sprain) and David West (right ankle) should play some part in Saturday’s game as well.

Both Los Angeles Clippers and Golden State Warriors have been in a fine form of late and an entertaining game is on the cards. However, seeing that Clippers suit Warriors, I am tempted to put my money on the visitors, who have been impressive on the road this season.