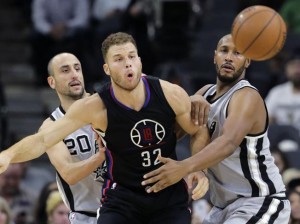 Los Angeles Clippers and San Antonio Spurs take on each other at Staples Center in their first game following the NBA All-Star 2016. Doc Rivers’ team suffered a shocking loss to Minnesota Timberwolves in their last home game and no doubt the hosts will be desperate to start a new winning run in front of home fans.

Los Angeles Clippers have been struggling to find their form of late and, no doubt, Blake Griffin has been sorely missed in previous games. Despite the numerous trade rumors, Griffin will stay at the club and seeing that he has overcome his injury, there is every chance he will make his return against San Antonio Spurs. Doc Rivers’ team are a real force to be reckoned with at home, but they were beaten by Minnesota Timberwolves 102-108 in their last home match. The team then recorded three consecutive wins on the road (Orlando, Miami, Philadelphia), but Boston Celtics proved to be a big catch for Clippers. In Blake Griffin’s absence Chris Paul has been the team’s key player and you should have in mind that the All-Star point guard is averaging 19.3 points this season.

San Antonio Spurs failed to impress in the 2014/2015 NBA campaign, but given that the club owners reinforced the squad last summer, Gregg Popovich’s men are definitely capable of regaining the NBA title. Spurs occupy second place in the Western Conference and they have just three wins fewer than the defending champions Golden State Warriors. Similar to previous years, coach Gregg Popovich has been sticking to his rotation policy in the 2015/2016 NBA season, but, chances are the experienced tactician is going to count on all of his key players for the Los Angeles Clippers game. San Antonio are on a six-game winning run ahead of the trip to California, but it has to be noted that they have already suffered eight defeats on the road this term. The team recorded a hard-fought 98-96 win over Orlando in their last game, but you should have in mind that Gregg Popovich decided not to risk Tony Parker against Magic. Parker is likely to return to the squad and he will be the man to watch in the away team, alongside LaMarcus Aldridge and Kawhi Leonard, who have been scoring for fun of late.

Manu Ginobili remains on the sidelines, while Tim Duncan returned to contention against Orlando. Tony Parker and Matt Bonner should both recover in time to face Clippers.

Thursday’s match at Staples Center pits together the two teams who are eager to go all the way in the 2015/2016 NBA play-offs. Considering that the match will be played in Los Angeles, there is every chance we will see a close encounter this time out, but I believe that Blake Griffin, who has recovered from his injury, should help the hosts record an important victory.