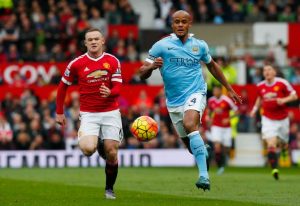 Manchester City will be looking to extend their winning run in the Premier League to nine games when they take on Arsenal at their Etihad Stadium. The Citizens aim to cement top position in the standings, but the Gunners have found their form of late and they should not be written off just yet.

Manchester City failed to impress in the 2016/2017 Premier League campaign, but they have been producing thrilling performances in all competitions in Pep Guardiola’s second season at helm. The Citizens have been scoring goals for fun in the English top flight this term and they are leading the chase for the domestic trophy ahead of Sunday’s clash against Arsenal. Kun Aguero was rested in a 3-0 win over Burnley at the weekend, but the Argentine striker is likely to lead the line for the league leaders against Arsene Wenger’s troops. Man City are on an eight-game winning run in the Premier League and they head into the match against Arsenal following a thrilling 4-2 win over Napoli in the Champions League. Raheem Sterling has been in a splendid form in the first half of the season and the pacey winger is likely to prove a handful for the opposition defenders.

Vincent Kompany misses the match with a calf injury, whilst Benjamin Mendy has yet to recover from a knee injury. Coach Pep Guardiola has no other selection worries ahead of the visit of Arsenal.

Arsenal made a slow start to the season, but they have been producing much better showings in the Premier League of late. The Gunners recorded four wins in previous five league fixtures and they showed character in a come-from-behind victory over Swansea City. Arsene Wenger’s men have been climbing the standings week by week and a win over Man City would see them regain their spot in top four. Arsenal did remarkably well to beat Everton 5-2 at Goodison Park in their last away game in the English elite division, but they will have a much bigger fish to fry in Sunday’s clash against the high-flying Citizens. Alexis Sanchez has been struggling to find his goal-scoring touch of late, but, no doubt, the opposition defenders should have him at bay. Anyhow, the visitors should be more than happy with one point from the Man City game as Pep Guardiola’s men look unstoppable at the moment.

Santi Cazorla, Danny Welbeck and Skhodran Mustafi are all sidelined with injury, whilst goalkeeper David Ospina is rated doubtful for Sunday’s showdown. Sead Kolasinac should recover in time to face Pep Guardiola’s charges.

Manchester City made a flying start to the season and the league leaders are determined to give fans yet another reason for celebration this weekend. Arsenal have been in a fine form of late, but the Citizens are likely to pose a much bigger threat for the capital club than their previous rivals.