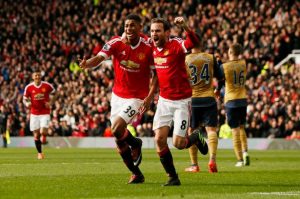 Manchester United and Chelsea square off against each other at Old Trafford in what is expected to be the most entertaining game of Sunday’s program. The Red Devils aim to build on a 3-0 win over Sunderland, but beating the high-flying Blues is easier said than done.

Man Utd eyeing a place in the Champions League

Manchester United have slim chances of winning the Premier League trophy, but they have already clinched the League Cup title, with the team beating Southampton in the final at Wembley Stadium. Thanks to a 1-1 draw with Anderlecht in Brussels the Red Devils moved one step closer to booking their place in the Europa League semis, but they have been playing below expectations in the Premier League this season. Manchester United sit in the fifth position in the standings ahead of the visit of Chelsea and they are four points behind their local rivals Manchester City. The hosts are desperate to get their revenge on Antonio Conte’s team for a heartbreaking 4-0 loss at Stamford Bridge and I am positive that Jose Mourinho’s men are going to leave their hearts on the field in Sunday’s showdown.

The likes of Phil Jones, Chris Smalling, Juan Mata and Ashley Young are all sidelined with an injury, while experienced attacker Wayne Rooney is unlikely to recover in time to face Chelsea at Old Trafford.

Chelsea are on the right track to regain the Premier League trophy, but the Blues will have to be at their sharpest in the remainder of the season if they are to win the silverware. The capital club quickly bounce back from an upsetting 2-1 loss to Crystal Palace and they will be looking to build on back-to-back triumphs over the likes of Chelsea and Bournemouth when they face Manchester United at Old Trafford. Antonio Conte’s men recorded a routine win over Eddie Howe’s troops at Vitality Stadium, with key player Eden Hazard once again proving his worth on the field. The league leaders are seven points clear of second-placed Tottenham Hotspur in the standings, meaning that they are likely to take the “Theatre of Dreams” clash very seriously. Chelsea are eyeing their fourth consecutive win on the road, but the game against the star-studded Red Devils will be anything but a walk in the park for the visitors.

Coach Antonio Conte has a full squad to choose from and he is likely to field the best possible side against Manchester United. The Italian tactician should stick to the 3-4-3 formation.

Both Manchester United and Chelsea are likely to go for a win in Sunday’s derby. The Red Devils aim to keep their hopes of securing a top-four finish alive, whilst the Blues want to cement the top position in the Premier League standings. Given the attacking potential of the two teams, a lively contest appears on the cards.