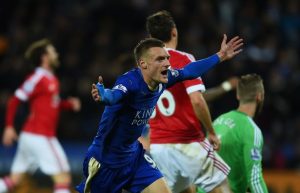 Manchester United will be looking to improve their top 4 hopes and at the same time spoil Leicester City’s part by defeating the Foxes at their Old Trafford. Claudio Ranieri’s men will be crowned Premier League champions if they win this match and that should be enough incentive to give their best on Sunday afternoon.

Manchester United fans haven’t had much to cheer about this season, but a strong finish to the current campaign could make all the difference. Granted, the Red Devils are still not performing to their potential, but their new-found ability to grind out results could see them end the season in style. The Old Trafford outfit are on the verge of winning the first major trophy since Sir Alex Ferguson stepped down having reached the FA Cup final, where they will be vying minnows Crystal Palace for the coveted trophy. At the same time, Manchester United seriously improved their chances of securing Champions League qualification with back to back wins over Aston Villa and Crystal Palace, and they now sit five points behind fourth-placed Arsenal, but with a game in hand. This means that the Red Devils need to try and win all the remaining games, but the game against title chasing Leicester City will provide a stern test for Louis van Gaal’s charges.

The manager has confirmed that Luke Shaw, Bastian Schweinsteiger and Will Keane remain on the sidelines, and he is unlikely to make too many changes to the side that defeated Everton in the FA Cup semi-final.

One more win will do

The dream season for Leicester City appears to be ending in the best possible way as the Foxes are now just a step away from lifting the Premier League trophy and probably achieving the biggest feat in the history of the game. Priced at 5,000 to 1 for the league title before the season started, Claudio Ranieri’s men have come a long way since, showing remarkable composure and ability to cope with increased pressure to sustain a challenge from Tottenham Hotspur and enter the final stretch in pole position. After slipping up against West Ham United and losing top scorer Jamie Vardy through suspension, the Foxes faced another big test against Swansea City, who had nothing to lose, but they once again proved they are worthy title contenders, winning the game 4-0 to remain in the driving seat. Only later did they find out that Spurs had failed to beat West Brom, meaning that just one win in next three games will be enough to clinch the title. It goes without saying that Leicester will give their best to finish the job at Old Trafford.

Jamie Vardy misses the Manchester United game having been handed an additional one-match ban, while Matty James is out injured.

Manchester United are aware they need to win if they are to stand any chance of securing Champions League qualification, and it is important to note they have improved up front since Wayne Rooney returned into action. Meanwhile, Leicester City hope to clinch the title at the first attempt, and having proved they can score even without Vardy, we are backing both teams to score at Old Trafford.