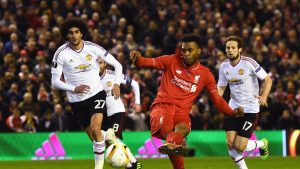 There will be fireworks when Manchester United and Liverpool face each other at Old Trafford on Matchday 21 in English Premier League. The Red Devils aim to extend their winning run in the league to seven games, but Jurgen Klopp has something else on his mind.

Red Devils on top of their game

Manchester United made a slow start to the season, but Jose Mourinho’s men have been impressive in the Premier League of late. Thanks to a 2-0 win over West Ham United the Red Devils extended their winning run in the league to six matches and, no doubt, they are high on confidence ahead of Sunday’s derby against Liverpool. Manchester United aim to keep their hopes of winning the domestic trophy alive, but the game against Jurgen Klopp’s charges will be anything but a walk in the park for the hosts. Zlatan Ibrahimovic has found his goal-scoring touch of late and the Swedish attacker is widely expected to lead the line for the hosts against Liverpool. Fellow star player Paul Pogba has been making progress week by week and all eyes will be on the duo when the two teams face each other at Old Trafford in the Premier League derby.

Zlatan Ibrahimovic should recover in time to face Liverpool, while Eric Bailly is on international duty with Ivory Coast. Marcos Rojo is a major doubt and he will be assessed on the match day.

Against all odds, Liverpool dropped two points in a 2-2 draw with relegation strugglers Sunderland in their last league match. The Reds then played out a goalless draw with Plymouth in the third round of the FA Cup, but it has to be noted that coach Jurgen Klopp experimented against the League Two outfit. To make things even worse for the fans, Liverpool suffered a 1-0 loss to Southampton in the League Cup semis, first leg, but they are certainly capable of overcoming the deficit in the return leg at their Anfield. The Reds face a difficult task in Sunday’s derby against Manchester United and considering that Jose Mourinho’s team have been in a splendid form of late, the visitors should be happy with one point from the Old Trafford showdown. The good news for the fans is that key player Philippe Coutinho has overcome his injury and the Brazilian ace is definitely capable of making life difficult for the opposition defenders.

Sadio Mane is on international duty, while Danny Ings and Marko Grujic are both sidelined with injury. Joel Matip is rated doubtful and he will be monitored ahead of kick-off. Philippe Coutinho returns to the starting XI after overcoming his injury.

Manchester United and Liverpool seem to be evenly matched ahead of Matchday 21. Both teams are likely to adopt a cautious approach in Sunday’s derby and seeing that they played out a goalless draw at Anfield earlier this season, I believe that there is a big value in betting on draw.