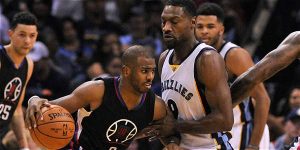 Friday’s game at FedExForum pits together Memphis Grizzlies and Houston Rockets. David Fizdale’s team aim to build on a 98-86 win over Detroit Pistons, but it remains to be seen if they are capable of upsetting Rockets, who suffered only one defeat in previous 12 games.

Memphis Grizzlies have been having their ups and downs in December. Following seven straight wins, the team suffered a loss to title holders Cleveland at Quicken Loans Arena. Grizzlies have been struggling to find their form of late and it has to be noted that they suffered three defeats in previous four league games. David Fizdale’s troops, though, gave fans some cheer on Wednesday as they outplayed Detroit Pistons at the Palace of Auburn Hills, with Marc Gasol scoring 38 points in the 98-86 victory over Stan Van Gundy’s team. Memphis aim to clinch their spot in the NBA play-offs and the good news is that Mike Conley’s injury is in the past. Grizzlies take on high-flying Rockets on Friday and the fact that they outplayed James Harden and Co. earlier this season is giving fans a reason for optimism ahead of the FedExForum clash.

Deyonta Davis is sidelined with a foot injury, while Brandan Wright misses the Houston Rockets game with an ankle problem. Coach David Fizdale has no other injury worries ahead of the match.

Houston Rockets have been impressive in NBA so far this season. Mike D’Antoni’s team sit in third place in the Western Conference and they have already recorded 22 wins this season. The team suffered no more than one defeat in previous 12 league games, with the team losing to their bitter rivals San Antonio Spurs on Tuesday. Houston outclassed Suns in their last league match and you should have in mind that James Harden led the team to a 125-111 win over Earl Watson’s men. The “Beard” is enjoying a season to remember as he has been averaging 27.8 points and 11.7 assists this term. Unlike last season, Rockets have been impressive on the travels in the 2016/2017 NBA campaign and they are eyeing their sixth consecutive win on the road. Mike D’Antoni is doing a great job with the Toyota Center outfit and it is no surprise his men managed to shock Golden State Warriors at Oracle Arena earlier in December (132-127).

Clint Capela remains on the sidelines with a leg injury and he is likely to return to contention in January. The likes of Chinanu Onuaku and Tyler Ennis did not play against Suns (coach decision), but the duo could return against Grizzlies.

Memphies Grizzlies are on a three-game losing run at home and they are eager to put an end to the negative trend. The hosts hope for a low-scoring game, but considering that Houston Rockets scored 101+ points in each of their previous eight away games in the league, I believe that there is a big value in betting on the visitors.