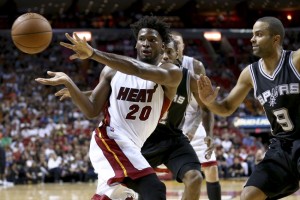 San Antonio Spurs will be aiming to extend their winning run to five games when they take on Miami Heat at American Airlines Arena. Erik Spoelstra’s men were beaten by Los Angeles Clippers on Sunday and they definitely face an uphill task in Tuesday’s game against Spurs.

Miami Heat did remarkably well to beat the likes of Dallas Mavericks and Charlotte Hornets in previous two games on the road, but Los Angeles Clippers proved to be a big catch for Erik Spoelstra’s team. Heat failed to impress in the 93-100 loss to Clippers and it has to be noted that they scored no more than 19 points in the first quarter. Goran Dragic netted 17 points against CP3 and Co., and the Slovenia international will be one of the men to watch in the home team in Tuesday’s clash against San Antonio Spurs. Unlike previous years, Miami Heat have been struggling at their American Airlines Arena of late, with the team recording only two wins in previous nine home matches (one in last five). Anyhow, you should have in mind that Heat are averaging 95.9 points this season. Chris Bosh is the team’s top scorer, meaning that Spurs could find it hard to contain the 31-year-old Miami ace.

The likes of Haslem, McRoberts, Richardson and Stokes did not enter the court against Clippers, but they could all return against Spurs. Tyler Johnson (shoulder) and Chris Andersen (knee) remain in the recovery room.

San Antonio Spurs failed to impress in the 2014/2015 NBA play-offs. Gregg Popovich’s men were beaten by Los Angeles Clippers in the Western Conference quarter-finals and they are eager to make amends for the unsuccessful campaign. Spurs occupy second place in the Western Conference, but they do not seem to be capable of overtaking high-flying champs Golden State in top position. The team’s recent form, though, is splendid and they will be aiming to record their fifth straight victory when they take on Miami Heat at American Airlines Arena. Against all odds, San Antonio Spurs struggled in the clash against Los Angeles Lakers, but they eventually recorded a hard-fought 106-102 win over Kobe Bryant and his teammates. Summer signing LaMarcus Aldridge led Spurs to said triumph with 26 points and nine rebounds and it has to be noted that he has been averaging 26 points in February. Yet another man to watch in the away side will be French superstar Tony Parker, who scored 14 points (4 assists) in the 106-102 win over Lakers.

Matt Bonner missed the Lakers game with injury (left calf strain) and he is doubtful for the Heat match. Manu Ginobili is sidelined with a groin problem, while Tim Duncan is unlikely to be risked (knee soreness).

Spurs coach Gregg Popovich has some injury worries ahead of the trip to Miami. Tim Duncan is unlikely to play against Heat, but Serbian giant Boban Marjanovic is definitely capable of replacing the experienced center. The visitors have been in a fine form of late and taking into account that Miami have been struggling at home of late, away win appears on the horizon this time out.