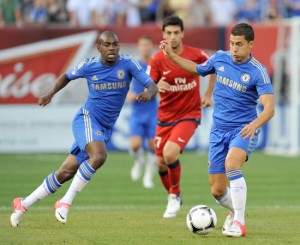 Grand Stade de Tanger will host the 2017 French Super Cup. Monaco did well to win the Ligue 1 title last season and, no doubt, Coupe de France Paris Saint Germain are eager to get their revenge on les Rouges et Blancs.

Monaco impressed in the 2016/2017 Ligue 1 campaign, with the team leaving star-studded Paris Saint Germain eight points behind them in the standings. Les Rouges et Blancs were producing fine performances in the Champions League as well and they did well to make it to the semis of the elite competition. Leonardo Jardim’s troops have big ambitions for the 2017/2018 season as well, but it has to be noted that the likes of Silva, Bakayoko, Germain and Mendy are no longer part of the team. Kylian Mbappe has been on Real Madrid’s radar in the summer transfer window and it remains to be seen if the club chiefs are going to manage to keep hold of the French rising star. Monaco take on PSG in the French Super Cup and they are eyeing their first Trophee des Champions title since 2000 when they defeated Nantes on penalties.

Summer signing Youri Tielemans is likely to start the match, while Joao Moutinho could be rested against PSG as he represented Portugal at the 2017 FIFA Confederations Cup.

Despite being regarded as hot favourites to win the 2016/2017 Ligue 1 title, Paris Saint Germain eventually finished the season in second place in the standings. Les Parisiens were playing below expectations last term and, no doubt, the club owners will give their best to reinforce the squad in the summer. Dani Alves joined the club from Juventus and the former Barcelona full-back is likely to play an important role in Unai Emery’s team next season. PSG are eyeing their fifth consecutive French Super Cup trophy and you should bear in mind that they rolled over Lyon in the Trophee des Champions last year. Edinson Cavani, who was scoring goals for fun last season, is likely to lead the attack for les Parisiens against Monaco and the Uruguay international is likely to pose a big threat for the opposition defenders. Seeing that les Rouges et Blancs have already sold several first-team regulars in the summer transfer window, Unai Emery’s charges are regarded as hot favourites to win Saturday’s clash.

Layvin Kurzawa is fit and he is likely to return to the starting XI, while Marco Verratti is a major doubt and he will be assessed on the match day. Julian Draxler returned from international duty, but he could be rested against Monaco.

Monaco did win the 2016/2017 Ligue 1 trophy in style, but, I have already mentioned, les Rouges et Blancs head into Saturday’s match without several first-team regulars and that is the main reason I am tempted to put my money on Paris Saint Germain, who are hungry for revenge.