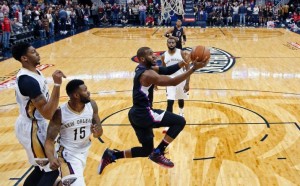 New Orleans Pelicans will be looking to clinch their place in the Western Conference play-offs semis when they welcome Portland Trail Blazers at their Smoothie King Center in Game 4.

New Orleans Pelicans have been producing splendid showings in the 2018 NBA play-offs. New Orleans are leading the series 3-0 against Portland Trail Blazers and they are with one foot in the Western Conference semis. New Orleans are eager to extend their winning run in NBA to nine games and a win over Portland will see them make it to the next round. Pelicans are brimming with confidence ahead of Game 4 and, no doubt, they want to get their job done in the tie against Trail Blazers as soon as possible. Spain international Nikola Mirotic impressed in the 119-102 win over as he scored no less than 30 points for Alvin Gentry’s troops. It has to be noted that New Orleans are eyeing their fourth consecutive win at home. Yet another man to watch in the home team will be Anthony Davis, who has been averaging 28.1 points this season.

The likes of DeMarcus Cousins, Alexis Ajinca and Frank Jackson remain in the recovery room, but coach Alvin Gentry has no other injury worries ahead of Game 4.

Portland Trail Blazers did well to finish the regular part of the season in 3rd place in the Western Conference and, as a result, they were

considered favourites to win the tie against New Orleans Pelicans. However, they failed to impress in first three games of the quarter-finals. Trail Blazers are on the verge of suffering elimination in the 2018 NBA play-offs, but hope dies last. Portland players are likely to leave their hearts on the court in Saturday’s clash against New Orleans Pelicans, but they will have to be at their sharpest this time out if they are to keep their hopes of making it to the conference semis alive. C.J. McCollum and Damian Lillard are undisputedly the team’s key players and all eyes will be on them when the two teams face each other in Game 4. Nonetheless, you should bear in mind that Portland are on a six-game losing run in NBA, speaking of away games.

The likes of Jusuf Nurkic and Evan Turner are both rated doubtful for Saturday’s clash, whils C.J. Wilcox is definitely out of contention with a knee problem.

New Orleans Pelicans are with one foot in the Western Conference semis and seeing that they are high on confidence ahead of Saturday’s showdown, I believe that they are going to record their fourth consecutive win over Terry Stotts’ charges. Taking everything into account, Pelicans are more of a team than Trail Blazers, thus this tie should be over on Saturday.