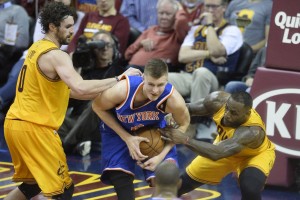 Cleveland Cavaliers will be looking to make amends for a shocking 104-95 loss to Brooklyn Nets when they take on New York Knicks, who are brimming with confidence following back-to-back victories over the likes of Chicago Bulls.

New York Knicks did well to beat Chicago Bulls 115-107 at United Center on Wednesday and even though many people expected that Derrick Rose and Co. would get their revenge on Knicks last night, Kurt Rambis’ men recorded yet another win over Bulls at their Madison Square Garden (115-107). Carmelo Anthony scored 50 points in the double-header against Chicago and the team’s top scorer is likely to prove a handful for Cleveland Cavaliers on Saturday. New York have slim chances of booking their place in the Eastern Conference play-offs, but they are certainly capable of upsetting Cavs in front of home fans. Knicks are eyeing their 18th win at home of the season, but you should have in mind that the team scored just 80 points in their penultimate home game, against Sacramento Kings (80-88).

The likes of Lou Amundson and Kyle O’Quinn did not enter the court against Chicago, but interim coach Kurt Rambis could count on the duo for the Cleveland Cavaliers game.

Unlike New York Knicks, Cleveland Cavaliers will take part in the Eastern Conference play-offs. Tyronn Lue’s men are leading the standings, with the team recording 51 wins, while suffering 21 losses in the 2015/2016 NBA campaign to date. Cavs have been impressive at home of late, with the team recording three consecutive wins over the likes of Dallas Mavericks, Denver Nuggets and Milwaukee Bucks at their Quicken Loans Arena, but they have not been as successful on the road. Following a 122-101 defeat to Miami Heat, Cleveland suffered a shocking 104-95 loss to Brooklyn Nets, meaning that LeBron James and his teammates will give 100% to return to winning ways when they take on New York Knicks at Madison Square Garden. Lebron James is averaging 25 points thi season and you should have in mind that he led Cavs to a 91-84 win over New York Knicks in December, 2015. Tyronn Lue’s troops are after their 22nd away triumph of the season.

James Jones and Sasha Kaun did not play against Nets (coach decision), but they could return against New York Knicks. Coach Tyronn Lue can count on all of his starters for Saturday’s match.

New York Knicks have been in a fine form of late, but Saturday’s match against the Eastern Conference leaders will be anything but a walk in the park for Melo and his buddies. Cleveland enjoy playing against Knicks and given that the visitors are desperate to bounce back from the loss to Brooklyn Nets, I am tempted to put my money on the last season’s finalists.