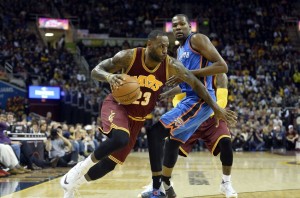 Oklahoma City Thunder will be looking to make amends for the shocking loss to Indiana Pacers when they take on Cleveland Cavaliers in what is expected to be the most entertaining game of Sunday’s program. Tyronn Lue’s men recorded a routine win over Chicago Bulls on Thursday night, but the clash against Thunder will be anything but a walk in the park for the visitors.

Oklahoma City Thunder failed to impress in the 2014/2015 NBA campaign. The team couldn’t make it to the NBA play-offs, but it has to be noted that their star men Kevin Durant and Russell Westbrook missed a number of games last season through injury. The duo has been fit in the 2015/2016 NBA campaign so far and, as a result, Thunder occupy third place in the Western Conference, behind title-chasing sides Golden State Warriors and San Antonio Spurs. It is well known that Billy Donovan’s men are tough to beat on home soil, but they head into Sunday’s showdown against Cleveland Cavaliers following a 101-98 loss to Indiana. Pacers put an end to Oklahoma’s nine-game winning run at home and no doubt the hosts will give their all to return to winning ways when they take on LeBron James and Co. on Sunday. Kevin Durant scored 31 points in the defeat to Indiana, with Russell Westbrook adding 23 and all eyes will be on the duo in the Chesapeake Energy Arena.

Coach Billy Donovan can count on all key players for the Cleveland game. Josh Huestis and Randy Foye did not enter the court against Pacers (coach decision), but they could return against Cavs.

Cleveland Cavaliers have been impressive of late. Cavs recorded a routine 106-95 win over Chicago Bulls in their first game following the All-Star break, but it has to be noted that Bulls were hit by injuries in Thursday’s match. LeBron James led his team to the victory with 25 points and, no doubt, the “King James” will be the man to watch in the away team in Sunday’s match against Oklahoma. Tyronn Lue’s troops occupy top position in the Eastern Conference and they will be aiming to extend their winning run to five games when they square off against Thunder at Chesapeake Energy Arena. Cavs won four straight home games, but you should have in mind that they suffered a 106-97 loss to Charlotte Hornets in their last match on the road.

Matthew Dellavedova made his return from injury against Chicago Bulls. Mo Williams did not play against Bulls, but he could play some part in Sunday’s game against Oklahoma City Thunder.

Sunday’s match at Chesapeake Energy Arena pits together the two teams that have big ambitions for the NBA play-offs. Both sides are regarded as contenders to win the title and, no doubt, we will enjoy watching Sunday’s game. Oklahoma produced a poor display in the defeat to Indiana Pacers on Friday night, but given their impressive home record, I believe that there is a big value in betting on Billy Donovan’s team this time out. Cavs often struggle on the travels and, taking everything into account, the hosts should eventually emerge victorious.

Pick: Thunder to cover the spread