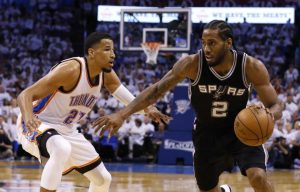 Oklahoma City Thunder will be looking to get their job done in the NBA play-off tie against San Antonio Spurs when they welcome Gregg Popovich’s men at their Chesapeake Energy Arena on Thursday evening. Spurs face a do-or-die situation this time out and it remains to be seen if they are capable of securing game 7.

Oklahoma City recorded yet another win at San Antonio Spurs on Tuesday evening and thanks to the 95-91 victory over Gregg Popovich’s troops Thunder moved one step closer to booking their place in the Western Conference final. The unstoppable duo Durant – Westbrook scored 58 points (35 – 23) between each other on the night and they once again proved handful for Spurs. Oklahoma are brimming with confidence ahead of game 6, but it remains to be seen if they are capable of handling the pressure. Billy Donovan’s men need to produce yet another amazing performance if they are to eliminate the star-studded Spurs in the 2016 NBA play-offs, but Thursday’s game against Kawhi Leonard and Co. will be anything but a walk in the park for the hosts.

Coach Billy Donovan has no fresh injury worries ahead of game 6, meaning that he can count on all of his star players for Thursday’s clash.

San Antonio Spurs disappointed their fans once again, with the team suffering a 95-91 loss to Oklahoma City Thunder at their AT&T Center on Tuesday evening. Situation in Gregg Popovich’s team is alarming ahead of the trip to Oklahoma City and it remains to be seen if they are capable of bouncing back from the shocking defeat. LaMarcus Aldridge scored 20 points in game 5, but it has to be noted that his shooting percentage was anything but good (6 of 21) in the 95-91 loss to Oklahoma. Tim Duncan is no longer sharp as he used to be in the past and you should bear in mind that the veteran scored no more than five points in game 5. As expected, Kawhi Leonard was the team’s top scorer in Tuesday’s match (26 points), but his teammates will have to be at their sharpest in the Chesapeake Energy Arena showdown if Spurs are to tie the series. Anyhow, the visitors will have to leave their hearts on the court this time out as they are on the verge of suffering elimination in the 2016 NBA play-offs.

Serbian giant Boban Marjanovic did not enter the court against Oklahoma in game 5, but he could play some part in Thursday’s match against Thunder as Tim Duncan failed to impress in the AT&T Center clash.

San Antonio Spurs missed a lot of shots at point blank range in game 5 and that was the main reason why they suffered the 95-91 loss to Oklahoma City Thunder. Gregg Popovich’s men are aware of the importance of Thursday’s clash and seeing that they face a must-win situation this time out, away win should be considered.