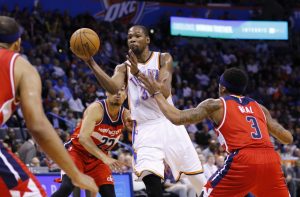 Oklahoma City Thunder will be aiming to record their fourth consecutive win in the league when they welcome Washington Wizards at their Chesapeake Energy Arena on Wednesday evening. In previous four meetings between the two teams Thunder emerged triumphant, meaning that Wizards are desperate to put an end to the negative trend.

Seeing that Kevin Durant joined Golden State Warriors in the summer, it was more than obvious that Russell Westbrook would play key role in Billy Donovan’s team this season. Westbrook has been producing thrilling displays in the NBA this term and he has become a real triple-double machine. He had his third consecutive triple-double and his 45th of his career before the halftime of Monday’s game against New York Knicks. Westbrook helped Thunder defeat Knicks 112-103 at Madison Square Garden and it has to be noted that Billy Donovan’s men extended their winning run to three games. Oklahoma occupy sixth place in the Western Conference and they are regarded as favourites to win Wednesday’s clash against Washington Wizards. However, coach Billy Donovan should warn his men against complacency.

Cameron Payne is sidelined with injury (foot), but he is the only absentee in the home team as coach Billy Donovan has no other injury worries ahead of the visit of Washington Wizards.

Difficulties on the road

Over the years Washington Wizards have turned their Verizon Center into a real fortress, but the team’s away record is anything but good. Wizards did well to beat Sacramento Kings in their last home game in the league, but you should bear in mind that they suffered five defeats in previous six matches on the road. Scott Brooks’ men were beaten by the likes of Philadelphia, Chicago and Orlando away from home in November and they certainly face an uphill task in Wednesday’s game against in-form Thunder. John Wall is undisputedly the team’s key player and it has to be noted that he has been averaging 23.1 points and 8.9 assists this season. Washington Wizards suffered a 114-98 loss to Oklahoma City Thunder in their last meeting at Chesapeake Energy Arena and it remains to be seen if the capital club are capable of getting their revenge on Billy Donovan’s troops.

Ian Mahinmi has been struggling with a knee injury and he is rated doubtful for the Oklahoma City Thunder game, whereas Danuel House is definitely out of contention (wrist).

Oklahoma City Thunder are brimming with confidence ahead of Wednesday’s encounter against Washington Wizards. Russell Westbrook has established himself as the team’s leader and he is likely to pose a big threat for Wizards in the Chesapeake Energy Arena clash. As I have already mentioned, Washington struggle on the road and, taking everything into account, the hosts are likely to emerge triumphant in Wednesday’s game.