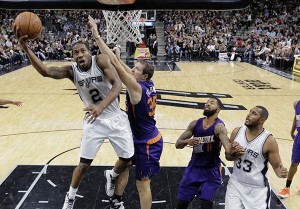 Saturday’s game at Talking Stick Resort Arena pits together Phoenix Suns and San Antonio Spurs. David faces Goliath in Phoenix and it remains to be seen if the hosts are capable of upsetting the star-studded visitors.

A season to forget

Phoenix Suns have been struggling in the 2016/2017 NBA season. Suns have already suffered 27 defeats in the league and, as a result, they are sitting at the rock bottom in the Western Conference. Earl Watson’s men, though, produced fine displays in defeats to the likes of Cleveland Cavaliers and Dallas Mavericks and that is giving fans a reason for optimism ahead of the visit of San Antonio Spurs. Phoenix suffered back-to-back defeats to Spurs in December and, no doubt, the hosts are hungry for revenge. Eric Bledsoe is undisputedly the team’s key player, but seeing that Kawhi Leonard is great at defence, the Phoenix point guard is unlikely to have a night to remember on Saturday. Devin Booker scored 39 points in the loss to Mavericks, meaning that Spurs should have him at bay. Suns are after their eighth home win of the season, but beating the title-chasing team is easier said than done.

Coach Earl Watson has no injury worries ahead of Saturday’s game. Alan Williams and Jared Dudley did not play against Mavericks (coach decision), but they could play some part against Spurs.

San Antonio Spurs failed to impress in the 2015/2016 NBA play-offs and, as a result, the club owners were forced to make some changes to the roster in the summer. Tim Duncan retired from professional basketball, with Spanish center Pau Gasol joining the club. However, Kawhi Leonard is still regarded as the team’s key player and he will be the man to watch in the away team in Saturday’s game against Phoenix Suns. San Antonio Spurs aim to overtake Golden State Warriors in top position in Western Conference and I am positive that the visitors will take the match very seriously. Gregg Popovich rested LaMarcus Aldridge in the 119-98 win over Suns earlier this season, but the former Portland ace is likely to play against Phoenix on Saturday. Aldridge has been averaging 17.6 points this season and he is likely to pose a big threat for Suns defence in the Talking Stick Resort Arena clash.

Coach Gregg Popovich has no injury concerns ahead of the trip to Phoenix, but he could stick to his rotation policy. Manu Ginobili is likely to spend more time on the court against Suns after he played only nine minutes in a win over Los Angeles Lakers.

San Antonio Spurs rolled over Los Angeles Lakers (134-94) in their last league game and considering that they are determined to clinch top position in the Western Conference, I am positive that the visitors will not afford any complacency in Saturday’s game against Phoenix. Spurs do not suit Suns and, taking everything into account, Gregg Popovich’s team are likely to record a routine win over Earl Watson’s troops at Talking Stick Resort Arena.