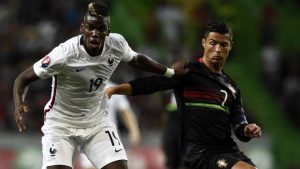 Having met just that one time during the 1986 World Cup in Mexico when Morocco won 3:1, Portugal will be motivated to even the score up. They will also be willing to carry on the momentum after battling for a draw with Spain in the first game. Portuguese squad will probably stay unchanged for this game. However, coach Santos might decide to rest some players ahead of the game against Iran.

Moroccans will have one notable absence, Nordin Abramat, who suffered a concussion in the Iran game. If Benatia manages to restrict Ronaldo’s movement, they will be in with a chance.

After winning the UEFA Euro 2016, Portugal will try to take back to back trophies and win this World Cup. After a great game on Friday, when they came back to win a point, the Portugal team will have all the confidence going into Wednesday’s game. Morocco, however, having suffered a hard defeat to Iran, will look to bounce back and get the maximum result against the Portuguese.

Portugal have managed to score three goals, all by Cristiano Ronaldo, while Morocco haven’t put in one yet. Ronaldo will have another motive, to beat Eusebio’s Portuguese record of scoring 9 goals in the 1966 World Cup. Bear in mind that before the Spain match, Ronaldo only scored three goals in total in the previous three World Cups.

Since Portugal have the quality to go a long way into this World Cup, Cristiano Ronaldo has every chance to beat Portugal’s record of 9 goals in a World cup tournament and Just Fontaine’s record of 13 goals scored in one World cup. It is a tall order, but not impossible.

One record that could possibly be broken, is the number of goals scored by one player in a single game. Oleg Salenko from Russia scored five against Cameroon in 1994. Scoring six goals in one game is a lot but remember; Ronaldo has already scored five goals in one match for Real Madrid, twice in 2015. Only a few months back he scored 4 against Girona in a 6-3 win.

The Moroccan coach will have an uphill task to motivate his team after the hard loss against Iran. The Portuguese, on the other hand, will be buzzing. Realistically, Morocco needed a win against Iran to have any kind of chance of moving past the group stage.

Portugal should make easy pickings out of the Moroccans and win easily in the end after a good battle. Remember, they were leading twice against Spain before having to sweat for a draw.

On the other hand, if Morocco manage to snatch a draw or even a surprise win, Portugal’s next game against Iran will have a somewhat more important connotation. The key matchup will be Cristiano Ronaldo against Medhi Benatia. And at the end of the day, Morocco have nothing to lose, so they might be a danger.