Industry News Potential US Presidential Hopeful is a Cryptocurrency Supporter 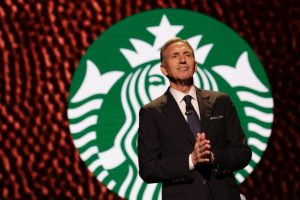 With less than two years before the US Presidential elections, the race for the nominations and then the main job is getting underway. In a previous couple of weeks, especially with the start of the new year, there have been several prominent individuals, some more than others, that have declared their intention to run. This took place in both major parties, but also among the independent candidates and smaller parties in the US political landscape.

However, among them, a potential candidate who has so far not made his stance on running completely know is a big fan of crypto. This is interesting, especially because of the overall climate that connects the US political system with the cryptocurrency potential – not just in the terms of campaign donations, but also as the broader measurement of the public sentiment towards crypto.

The former CEO and chairman emeritus of Starbucks, Howard Schultz announced on last Sunday that he was considering entering the race for the highest office in the country. He is an interesting and somewhat divisive figure, but also one who is known in the cryptocurrency community. Previously, in this regard, he stated that the future will include cryptocurrencies as one of their essential part in a world based on a digital economy that is completely cashless. However, he is also not precisely adored in the crypto community because of his view that bitcoin is not a legitimate representative of the phenomenon of the cryptocurrencies as they should look like.

The former CEO stated these things when he discussed blockchain and cryptocurrencies during the conference call on the company’s quarterly earnings in 2018. Back then, he told the investors that he did not see BTC becoming a widely-used financial element but he underlined the many benefits of the use of the blockchain in the domain of fintech. He connected this especially with the ways how blockchain is offering Starbucks a new way for the company to embrace new payment models. Schultz even talked about the possibility of the incorporation of cryptocurrencies into his company’s long-term digital payment development strategy.

He did underline that he did not see the crypto field becoming super-relevant in a short amount of time, but that he did see the same happening in the years to come. His main concern was the necessity of the business world to understand the new times that are up ahead and get ready to find the best ways to incorporate it into their successful business.

Recently, Schultz apparel began to change his mind about bitcoin. In summer 2018, Starbucks become engaged with Intercontinental Exchange, which is a New York Stock Exchange partner on the Bakkt service, which is an upcoming figures exchange based on bitcoin. The hospitality retailer, in this case, would join in the process of helping develop an app that is practical and which would help in the conversion of digital currency into the USD on point of sales, like when anyone buys a coffee using a bitcoin wallet.

This process clearly does employ bitcoin and Schultz must now see it as a valid network for any digital-to-USD transfer that was accepted by the Starbucks. However, to be fair, such big turns and twists are not unknown to the business domain, especially the top rated ones. Here, just like in esports, tech investments and other quick-moving fields, any business leader must be ready to change their outlook on the flip of a dime when the market logic dictates. Right now, the logic that Schultz probably noticed is that bitcoin is not going anywhere.

Schultz announced that he was thinking about running as an independent candidate that describes himself as a centrist. This coincides with the release of a new book he authored called From the Ground Up: My Journey to Reimagine the Role of a Global Business which came out on Monday. All of this was further packaged into a tour of the country where the businessman stated that he plans to learn and listen.

The same tour will take place over the upcoming weeks and months. He explained that he hopes that he will be able to better understand the country at this fragile moment and find a way to improve some of the things he sees as an issue, like leadership and general governance. The process is very similar to a standard political tour which makes it very likely that he will actually throw his hat in the ring and declare a nomination.

Unsurprisingly, the odd form of this public statement, which includes may-or-may-not run, a book tour and a basic DIY town hall tour made Schultz the butt of many jokes. A lot of people on social media shared their dismay with the candidacy and the sheer disjointed nature of its approach.

At the time when the US is sharply divided between the current president and its bitter opposition, having an attitude like this seems a bit clownish. Some even labeled the entire venture as a very dramatic and over-the-top form of book tour promotion, which is propped up by nothing more than the fact that Schultz was a CEO of a huge company. So far, there has not been any reaction from the man on this subject or even the possibility of running.

In spite of the overall unlikeliness that Howard Schultz, even if he decides to run, will leave any lasting impression on the US political landscape, the very fact that he is pro-crypto is reassuring. In the world where some countries are trying to ban crypto use completely, knowing that a potential US presidential candidate has the view that digital currencies are both good and numeracy shows just how far the role of cryptocurrencies has advanced in the general public mindset. Howard Schultz will likely fade from memories soon enough, but his influence on the election process might be a perfect time to see where is crypto going not just in these elections, but also those that will come in the future.