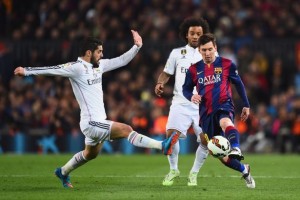 A place in the Champions League quarter-finals will be at stake when Paris Saint-Germain and Barcelona face each other in the two-legged tie. Barca are unlikely to defend their La Liga title and it remains to be seen if they will save the season by winning the elite competition.

Paris Saint-Germain have established themselves as the dominant force in French football in the 21th century, but they are on a very difficult quest in the 2016/2017 Ligue 1 campaign. Les Parisiens sit in second place in the standings after 25 rounds and they are three points behind high-flying Monaco. Coach Unai Emery wants to win everything, but the Ligue 1 champions face an uphill task in the Champions League tie against Barcelona and it remains to be seen if they are capable of getting their revenge on the Catalan giants. PSG were totally outplayed by Barca in the knockout stages of the elite competition two seasons ago, but the fact that les Parisiens are on a four-game winning run at the moment is giving fans a reason for optimism ahead of Tuesday’s showdown. Edinson Cavani scored twice in a 3-0 win over Bordeaux and he will be the man to watch in the home team.

January signing Julian Draxler could make his PSG debut in the Champions League against Barcelona, while Javier Pastore is definitely out of contention through injury. Thiago Motta is banned, while Grzegorz Krychowiak is unlikely to recover in time to face Barca.

All eyes on the MSN trio

Barcelona have been having their ups and downs this season. The Catalan giants have already dropped a number of points in the national championship and, as a result, they are unlikely to defend their La Liga title. Luis Enrique’s, though, men made it to the Copa del Rey final and they are determined to book their place in the Champions League quarter-finals. However, beating Paris Saint-Germain in the two-legged tie is easier said than done and Leo Messi and Co. will have to be on top of their game in the upcoming two-legged tie if they are to advance to the next round. The MSN trio has been in a perfect working order of late and the visitors are likely to adopt an attack-minded approach in Tuesday’s clash against les Parisiens. Anyhow, if Barca manage to find the net in the first leg they would be with one foot in the quarter-finals of the elite competition.

Aleix Vidal broke his leg in Saturday’s La Liga clash against Alaves and Sergio Roberto is likely to step up. Javier Mascherano remains in the recovery room, but fellow defender Gerard Pique should be recalled to the starting line-up.

Both PSG and Barcelona are likely to go for a win in Tuesday’s clash in the “City of Lights” and given attacking potentials of the two teams, a high-scoring affair appears on the cards. In their last meeting at Parc des Princes Barca recorded a 3-1 win over PSG and, taking everything into account, both teams to score bet should be considered.