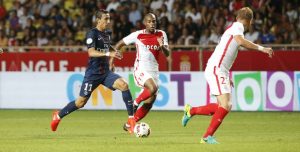 There will be fireworks when PSG and Monaco face each other at Parc des Princes in a match that could well decide the Ligue 1 champions. Les Parisiens are three points behind Leonardo Jardim’s troops in the standings, meaning that this has to go down as a must-win game for the title holders.

Paris Saint-Germain dropped a lot of points in the first half of the season, but the reigning champions have been impressive in all competitions in 2017. Les Parisiens outplayed the likes of Rennes and Nantes on the road in previous two league fixtures, but Monaco are still leading the chase for the Ligue 1 trophy. The title holders, though, will have a chance to get level on points with les Rouges et Blancs as the two teams face each other in the Ligue 1 derby on Sunday evening. The capital club are likely to fight tooth and nail against Monaco, but the hosts will have to be at their sharpest in the Parc des Princes showdown if they are to win the derby. Edinson Cavani has netted 20 goals in 19 appearances in the league this season, meaning that the opposition defenders should have him at bay.

Full-back Serge Aurier returns from international duty, but he is unlikely to start against Monaco. Javier Pastore has overcome his injury and he is likely to play some part in Sunday’s derby. Grzegorz Krychowiak is likely to miss the match with injury.

Monaco are desperate to put an end to PSG’s dominance in French football. It has been 17 years since les Rouges et Blancs won their last domestic trophy and they are definitely capable of winning the 2016/2017 Ligue 1 title. Leonardo Jardim’s men sit in top position in the standings ahead of the trip to Paris, but they are only three points clear of les Parisiens in the table. Monaco rolled over Lorient (4-0) at the weekend, but they will have a much bigger fish to fry in Sunday’s clash against Paris Saint-Germain. The league leaders would be happy with one point from the Parc des Princes game and they are likely to adopt a defence-minded approach against Unai Emery’s team. Radamel Falcao has been scoring goals for fun ever since he returned to Stade Louis II and the Colombian attacker will be the man to watch in the away side in Sunday’s derby.

Adama Traore and Nabil Dirar are on international duty, but coach Leonardo Jardim has no fresh injury worries ahead of the PSG game. Valere Germain should be recalled to the starting line-up after he was rested in the Coupe de la Ligue clash against Nancy.

PSG want this win more than Monaco as they are eager to keep their hopes of winning the Ligue 1 title alive. However, considering that les Rouges et Blancs have been scoring goals for fun of late, I believe that both teams will find the net in the Parc des Princes showdown.