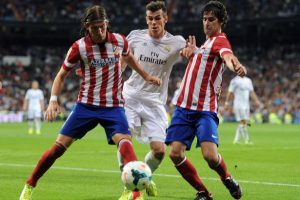 Real Madrid and Manchester United face each other at Levi’s Stadium in what is expected to be a real football festival. Los Blancos aim to kick off their International Champions Cup campaign in style, but the Red Devils should not be written off just yet.

Los Blancos eager to prove their worth

Real Madrid did well to win the La Liga trophy last season and they put icing on the cake on a very successful season with a triumph in the Champions League final. Los Blancos outclassed Juve in the title game, with Cristiano Ronaldo proving his worth in the title game. Real Madrid enjoyed a very successful season and there is every chance the club chiefs will keep hold of key players in the summer transfer window. James Rodriguez was hungry for a first-team football and, as a result, the Colombian ace joined Bayern Munich. Zinedine Zidane’s troops aim to record a good result at the 2017 International Champions Cup and they are likely to take Sunday’s clash against Manchester United very seriously. As always, a man to watch in the La Liga side will be aforementioned attacker Cristiano Ronaldo.

Manchester United failed to win the Premier League trophy last term, but they lifted both Europa League and League Cup trophies in the 2016/2017 campaign. Jose Mourinho, though, is hungry for more success and “the Special One” is definitely capable of bringing glory days back to Old Trafford. Man Utd head into Sunday’s clash against Real Madrid following a thrilling 2-0 win over their local rivals Manchester City and they are certainly high on confidence ahead of their second match at the 2017 International Champions Cup. Romelu Lukaku has already started paying off and the summer signing, who scored in the triumph over Man City, is likely to pose a big threat for the opposition defenders. In their last meeting at the ICC the Red Devils recorded a 3-1 win over Real Madrid and that is giving fans a reason for optimism ahead of the Levi’s Stadium showdown. Coach Jose Mourinho is likely to stick to the 4-2-3-1 formation.

Wayne Rooney is no longer part of the team, whilst experienced attacker Zlatan Ibrahimovic is closing in on a return. However, Sunday’s clash comes too early for the Swedish footballer.

Manchester United produced a fine performance in the 2-0 win over Manchester City, but beating Real Madrid at the International Champions Cup is easier said than done. Jose Mourinho knows Real Madrid players well and, taking everything into account, I believe that the Premier League team are capable of holding los Blancos to a draw in Sunday’s clash.