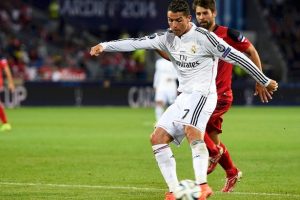 Real Madrid will be looking to put an icing on the cake on a very successful 2015/2016 campaign when they take on Europa League winners Sevilla in the 2016/2017 UEFA Super Cup. The two teams take on each other in an all-Spanish clash at Lerkendal Stadion and it remains to be seen who is going to have a reason for celebration this time out.

No Bale, no Ronaldo

Real Madrid proved their worth in the 2015/2016 season, with the team clinching their 11th Champions League trophy. Los Blancos defeated Atletico Madrid on penalties in the title game and they face fellow La Liga side Sevilla in the UEFA Super Cup. Key player Cristiano Ronaldo picked up an injury in the Euro 2016 final with Portugal and he is unlikely to recover in time to face Sevilla in Tuesday’s clash. To make things even worse for the fans, Gareth Bale is out of contention as well, meaning that all eyes will be on Karim Benzema this time out. Real Madrid defeated Sevilla in the 2014/2015 UEFA Super Cup and they certainly want history to repeat itself. Zinedine Zidane’s troops head into the match following a 1-0 win over Bayern Munich at the International Champions Cup and they are considered favourites on paper to beat Sevilla at Lerkendal Stadion.

The likes of Cristiano Ronaldo, Gareth Bale, Pepe and Tony Kroos are all out of contention, whilst youngsters Marcos Llorente, Mariano and Luca Zidane made the squad.

Two years ago Real Madrid defeated Sevilla (2-0) in the UEFA Super Cup and, no doubt, the Andalusian outfit are hungry to get their revenge on los Blancos. Los Sevillanos won their third consecutive Europa League trophy last season, with the team coming from behind to beat Liverpool in the title game. Coach Unai Emery, though, is no longer in charge of the team, with Jorge Sampaoli taking over the reins. The club chiefs have been very busy during the summer transfer windows and it has to be noted that the likes of Ben Yedder, Luciano Vietto, Vazquez, Mercado, Ganso, Kranevitter and Pablo Sarabia joined the club. However, last season’s top scorer Kevin Gameiro signed a deal with Atletico Madrid and the French striker is going to be sorely missed in Tuesday’s clash against Real Madrid. In his absence, a man to watch in Jorge Sampaoli’s team will be Vitolo, who did not leave the club in the summer transfer window.

Fernando Llorente joined Swansea City, while Coke signed a contract with Schalke. Aforementioned attacker Kevin Gameiro is no longer part of the team as well. Midfielder Ganso should recover in time to face Sevilla.

Real Madrid head into the match with a severely-weakened squad, but regardless of which players will be deployed in the starting XI, I believe that Zinedine Zidane’s troops are going to find the net in the UEFA Super Cup. Los Sevillanos impressed in the 2015/2016 Europa League final and given that they are hungry for revenge, both teams to score bet appears on the cards.