Opinion The Rise of Ethereum and the Threat to the BitCoin 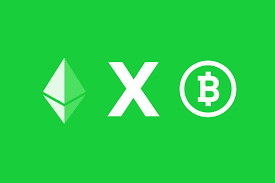 An aspect of the cryptocurrency that is often overlooked is the fact that they come as open source technology. The underlying tech based on blockchain principles is something that can be utilized by pretty much anyone who desires to employ it for any reason. Because of this, since the BitCoin network went live, many alternative cryptocurrencies have come about, using a very similar principle as the BTC.

While some lasted only a short time and others continued to operate longer, none of them really made any impact on the BitCoin ecosystem. Even the most successful alternative digital currencies at the height of their popularity did not manage to siphon any BTC users to their networks.

But now, for the first time, it seems that there is a system that has the potential and the impulse needed to infringe on the BitCoin turf. This system is Ethereum and its digital currency, or value token called Ether which is gaining in popularity ever since they started operating. Many believe it could even end up as a BitCoin replacement, no matter how far-fetched that might seem now. Here are the most important facts about Ethereum and the way the network functions and grows.

The Green Light from CoinBase

In the previous several quarters, it cannot be said that the Ethereum network did not get a lot of attention from the digital currency community and related mass media. But, in a previous couple of days, the amount of attention skyrocketed when it became known that CoinBase, one of the biggest providers of digital wallets on the planets, included Ethereum in their offer of connected services.

CoinBase, created in 2012, currently has 4.1 million users, which is a huge part of the overall digital wallet market. It is also backed by very important funders who are active in a range of industries, all based in the Silicon Valley. Interestingly, the same giant of the crypto services remained completely closed to other digital currencies and was an exclusive affiliate of the BitCoin network, until now.

Currently, Ethereum does not possess a lot of the brute-force reach of the BitCoin nor does it have the framework created through years of lobbying that the older network put in place to get to the position where it is now. Until now, the Ethereum was primarily used in the secondary domain of BitCoin, which mostly included trading BTC for Ether on external exchange websites.

Because of this, people who simply wanted to use BTC to bet online did not go for Ether because the BTC could be purchased directly using fiat currency and the other one could not. But now, this status has been irreversibly changed because, on CoinBase, the Ether has the exact same status as BTC. The same feature has not just been rolled out for a selected number of users, but for the entire user base. In fact, the CoinBase trade page shows the Ether on its trade page.

Expanding and Evolving the Cryptocurrency Market

The decision of the CoinBase allowed many millions of new people to attain and use BitCoin and Ether in equally easy manner. Now, every CoinBase user will be able to convert his or her BitCoins into Ether or do the reverse thing, accompanied by security and ease of use. Now, the service will have to calculate the ETH/BTC trading ratios on day to day basis.

There are no clear indicators how this process will take place, but the management of the service does not seem worried about it. The Ethereum inclusion is a big deal for the realm of cryptocurrencies, but also the digital currency domain as well.

The second currency will provide the users of CoinBase with a lot more freedom and flexibility, but others in the BitCoin community fear that this direct linking of two systems might play out badly for the BTC. As numerous examples from many different domains of digital ventures testify, ranging from startups to E-Sports leagues, diversity always comes with plenty of challenges, especially to the leaders of the pack. Now, the leader is BitCoin, but Ethereum just got a huge gust of wind directly in its main sail.

The new setup will show if the loyalties of the BTC users are connected with the particular cryptocurrency or to the notion of a digital currency market as a global phenomenon. If the second idea is true, a lot of the BTC users will simply switch to Ether when a particular opportunity arises.

The playing field is additionally complicated by the recent announcement of Fred Ehrsam, one of the co-founders of CoinBase who explained that the company was not interested in simple clones of BitCoin. At the same time, he made clear that digital ventures that offer something new could find themselves on the same service. In his view, the issue is not defined by the notions of new vs. old, but a paradigm which is defined as cryptocurrency vs. cryptoassets.

He believes that the stream of digital currencies that came after BitCoin dubbed AltCoins, just tried to do the same thing as BTC, which is the process of storing of value and its transaction. On the other hand, Ehrsam deems Ethereum as something different and new, which provides features and abilities that are not just copied from BitCoin. Here, the opportunities which the same network provides to its users mean that it is not just another cryptocurrency, but a full digital asset.

Because of this, he believes that the future will see many forms of digital wealth holders, but also millions of websites and apps that use some form of blockchain tech. However, the thinks that these will be built on a handful of base systems and for now, Ethereum seems like the best candidate for the same job, at least as far as the CoinBase management perceives the situation.

BitCoin is also interested in being used as a digital asset, much in the same way as Ethereum is. But for now, it is still first and foremost a digital currency for a huge majority of its users and the rise of Ether could come at a direct cost to its trading value.

While there is no way how BitCoin could boost its digital asset potential in a short amount of time, the situation with Ethereum shows that the community has to find ways to expand its user base and bring more people into the cryptocurrency domain, even if they risk that some of them will quickly become Ether users as well.