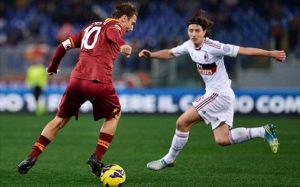 Juventus will be looking to clinch their seventh consecutive Serie A title when they take on Roma at Stadio Olimpico in the penultimate game of the season. The Bianconeri are one point away from defending Scudetto, but they will have to prove their worth on the field.

Roma are enjoying a very successful season. The Giallorossi did well to make it to the Champions League semis and they are on the right track to secure a top-four finish in the Serie A. The Romans are four points clear of fifth-placed Inter in the standings, meaning that a win over Juventus in Sunday’s derby will see them book their place in the Champions League. The capital club have been in a thrilling form of late, with the team eyeing their fifth consecutive win in the national championship. Roma are a real force to be reckoned with at home and there is every chance Eusebio Di Francesco’s men will leave their hearts on the field. A man to watch in the home team will be Edin Dzeko, who has netted 16 goals in the Italian top flight so far this term.

The likes of Bruno Peres, Defrel and Karsdorp are all sidelined with an injury, whilst the likes of Manolas and Perotti are both rated doubtful. Coach Eusebio Di Francesco is likely to stick to the 4-3-3 formation.

Thanks to a thrilling 4-0 win over Milan Juventus clinch the Coppa Italia trophy and moved one step closer to winning the double. Max Allegri’s troops are six points clear of Napoli ahead of Matchday 37, meaning that they are one point away from winning their seventh consecutive Scudetto. Juve head into Sunday’s clash following back-to-back wins over the likes of Inter and Bologna and they are certainly brimming with confidence ahead of the trip to the “Eternal City”. The league leaders are likely to adopt a cautious approach in the Serie A derby, but I believe that they will have a number of chances to score on the break. Experienced attacker Gonzalo Higuain is likely to lead the line for the Bianconeri against Roma. In their last away game in the Italian top flight, Juve came from behind to beat Inter at Stadio Giuseppe Meazza, but the clash against the high-flying Romans will be anything but a walk in the park for the reigning champions.

Juan Cuadrado is banned, whilst the likes of De Sciglio and Sturaro remain in the recovery room. Experienced defender Giorgio Chiellini is a major doubt and he will be assessed on the match day.

There will be fireworks when Roma and Juventus face each other at Stadio Olimpico in the Serie A derby, but seeing that both sides should be happy with one point from Sunday’s showdown, there is a big value in betting on draw.