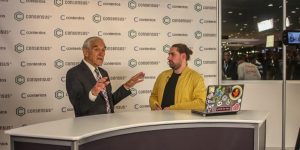 Presidential candidate and former US congressman Ron Paul recently appeared at Consensus 2019. There he once again provided his insight into the cryptocurrency domain and its events, naturally from a hard libertarian perspective.

For some time, the connection between this political current that believes the best government is small and hands-off and the digital currencies has been growing stronger. Ron Paul is thus more than competent to share his opinion on bitcoin and crypto as a whole, especially the political and legislative issues concerning cryptocurrencies.

This time around, he talked about his colleagues from the political domain, but also the institutions themselves and laws that could be related to cryptocurrencies and their use. Like always, he presents an interesting take on really relevant and up-to-date events and here are some of the most important parts of his outlook on the crypto domain.

Paul took the chance to open fire on one of his political colleagues. The man in question is Representative Brad Sherman from the Californian Democrats. Previously, Sherman called for a full ban on cryptocurrency purchases within the US territory. Paul called this a terrible idea. This was part of his wider focus on the Consensus 2019 that delved deep into the idea that the federal government should stay out of cryptocurrency markets.

He said that he is short on details and where the government is actually planning to do something, but he reiterated that he is certain that they are keenly watching the ecosystem. Paul compared cryptocurrency to gold, silver or peanuts, in the sense that the government will not give crypto a free ride. He was further dismissive of the call from Sherman to ban crypto, which took place during a Congressional Hearing in May. Back then, Sherman said that he is looking for support from colleagues to join him and create a bill.

The same bill would directly outlaw any cryptocurrency purchases by American citizens. In fact, the presidential candidate has some harsh words. He called the member of the House Financial Services Committee another thug in Washington. Explaining, he said that people like Sherman believe they know what is best for the US and their citizens and that they run the whole setup. This makes them, in the eyes of Paul, equal to dictators and in this setting, Sherman is nothing unusual.

Ron Paul has a strong track record of being on the side of all things libertarian. He pointed out that Sherman is just the opposite. In his view, Sherman is a typical politician in all important issues. This is why he was decidedly against legalizing marijuana just a few years ago. But, for Paul, the entire drive of him and other politicians basically desire for power and nothing more.

He explained how people like him through the world actually break it down and this is why places like Venezuela become ultimately a complete failure – because of the presence of too much government. Instead of embracing change, Paul believes that the lawmakers perceive the cryptocurrencies like something else – a threat.

This is particularly related to the monetary system and the status quo it provides for so many power structures. Here, this politician is completely right, at least for a substantial number of those in the financial positions of power – even people like Warren Buffett can be counted among them.

Paul believes that the US economy and the entire monetary system could be running on an ever-shortening amount of time. High debt levels are one of the best examples of this issue. For Paul, the system is not viable any longer and its individual mechanisms, like the ones related to borrowing, are out of control. This could result in the existence of the US dollar and no actual working system to prop it up. In the US system, the particularly big burdens are the military, social programs, and corporate welfare. As these politicians see it, the system is broken and it has been broken for a long time.

The liquidation has to come and with debt this size, the only option for Paul is that it has to eventually disappear. Here, crypto could play a huge role. This is why in spite of the fact that he does not know the technology behind it very well or the path it will take, he is excited to see the competition with the traditional financial sector and fiat currencies. He is also aware of the limitation, but the benefits of simply having crypto clearly overweight any downsides from his libertarian perspective.

Right now, Ron Paul believes that one of the key problems for crypto is choice. Individuals not just in the US but around the world need to see crypto as an alternative and begin to use it. At the same time, he was asked what type of crypto policy would he pursue if he was to become the US president. Paul said that he would go for, like in so many other issues, for a light regulatory regime. He would, in other words, try to keep the government influence and stepping in as low as possible.

Yet, he still noticed that the public has to be protected from fraud and that there need to be mechanisms to punish those who do engage in fraud. Also, he stated that a regulatory agency for startups and companies working with crypto would need to be established, apparently outside of the current CFTC.

There are a lot of people both inside and outside of politics who do not care much for the libertarian system. But, in this case, Paul stated some undeniable facts, especially about the US system in the present day and age.

In many other domains, like in esports, a light regulatory touch was able to deliver good results. Still, in spite of all those feasible proposals, there is still a strong sense that Ron Paul, just like his crypto ideas, is still way outside the mindset of a regular US voter.