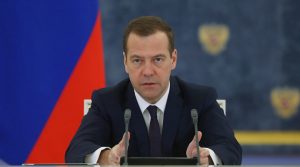 Just a couple of weeks after the first EU PM decided to talk openly about the need for the European Union to embrace the blockchain tech, including its currency manifestations like bitcoin, a new head of state also took to the podium with blockchain tech on his mind. While his country is also located in Europe, it is most definitely not a part of the EU and the politician in question was Dmitry Medvedev, the Prime Minister of the Russian Federation.

The statement came in unclear circumstance, but its validity is not taken into questions. Additionally, the news is odd because of the turbulent relationship with BTC in particular had with this superpower. However, there were many signs that the tide is changing in Russian and Medvedev’s comments seem to strongly hint that the change could be faster than expected.

Here are all the details about the same statement and the reason why could it be important not just for the domestic market in Russia, but the entire global blockchain community.

According to the TASS news service, Medvedev made this statement at a recent gathering in the city of Sochi. The former host of the Winter Olympics this time around hosted an investor’s summit where the Russian PM was also present.

Medvedev, who was also an acting Russian president in the period between the Putin presidencies, declared that blockchain tech has the potential to create a major impact. But, in a true Russian governmental style when it comes to cryptocurrencies in general, he continues this thought by saying that the world has so far failed to see any results.

The unusual nature of this statement is seen mainly in the idea of painting the obvious bitcoin as something irrelevant at this point. While many can argue about the nature of this cryptocurrency and its impact in the modern world, few if any aside from the top Russian official could be so bold to pretend it does not matter.

The truth is that bitcoin very much does matter in the current state of affairs on a global scale. Today, millions are using it to bet online, complete purchase and do many additional things. The trend of user engagement is on the rise with both regular citizens and companies.

In the background of the actual market presence of bitcoin, the development teams are working hard on expanding the use of BTC and their number is constantly on the rise. Thanks to all of this, bitcoin, a direct application of the blockchain principle in its core form, is a substantial result, regardless of the fact that the Russian PM does not perceive it that way.

Another possibility is that Medvedev simply tried to convey that the blockchain tech did not provide any substantial results for the Russian economy. This would make more sense because there are Russian ventures that are actively looking into the ways blockchain can be put to use, often completely outside of the most developed domain of cryptocurrencies.

That is why Medvedev personally mentioned both blockchain and smart contracts before in his public appearances. Now once again, he stated that he was not against the use of the same technology, but unlike the recent appearance of Malta’s PM, he did not go on to endorse the development process.

Instead, he said that even though blockchain tech has the power to change the lives of the people across the globe, the results are not that evident or persistent. In this interpretation, the stance of the Russian PM could easily echo that of the entire government – blockchain and even digital currencies are something they are interested in, but on their own terms.

The Bank of Russia

When it comes to the position of the country’s central bank, the Bank of Russia, Medvedev’s approach is questionable. Instead, the same institution appears to be fully engaged in the development of the blockchain applications. This is so apparent that the bank even made its intentions public about one year ago.

After that, the bank began studying the tech from a really diverse standpoint. Aside from the obvious digital currency angle, the Bank of Russia also developed its prototype for a distributed ledger. The prototype was created in 2016 and called Masterchain, where it continues to play a role in widespread testing procedures.

From this, it is clear that while Medvedev has some reservations about blockchain the same is definitely not true for his country’s central bank. With this scope of testing, the same institution has to be one of the most forward thinking central banks when it comes to blockchain, while at the same time, it is located in a country that officially presented a very guarded posture on the same tech.

Russia vs EU in Blockchain Development

The stream of news coming from the EU and Russia on the development of blockchain tech and its legislative environment shows that both entities are serious about the issue. At the same time, both entities continue to present the same development in a way that is typical for them.

The EU is splintered and fails again and again to find its common voice on the topic. On the other side of the continents, Russia is a mystery and apparently approaches blockchain as if it approaches its foreign policy – in an unclear manner and with a methodology that is hard to understand from the outside.

But, what is not hard to see when it comes to Russia is that the potential it has is clearly understood by its political establishment. As a nation that is a heavyweight in its native social media, eSports and many other global digital ventures, Russia seems poised to enter the area of blockchain. As it does, its leaders continue to put on a posture that communicates all possible messages at the same time, including negative, natural and positives.