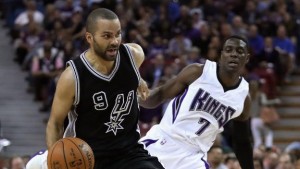 Buoyed by a thrilling 129-100 win over reigning champions Golden State Warriors, San Antonio Spurs take on Sacramento Kings at Golden 1 Center in yet another away match. Gregg Popovich’s men are high on confidence ahead of the trip to Sacramento, but they will have to prove their worth on the court.

All eyes on “Boogie Cousins”

Sacramento Kings failed to make it to the NBA play-offs last season, but the club chiefs did well to keep hold of key player DeMarcus Cousins. “Boogie Cousins” was averaging 26.9 points and 11.5 rebounds last season and, no doubt, he will play an important role in Dave Joerger’s team in the 2016/2017 NBA season. Kings recorded a 113-94 win over Suns in the opening match of the season and it has to be noted that Cousins scored 24 points in the victory over Earl Watson’s team. The likes of Arron Afflalo, Garrett Temple, Matt Barnes, Ty Lawson and Anthony Tolliver joined the club in the summer and, no doubt, Kings have big ambitions for the upcoming season. However, you should bear in mind that Sacramento suffered three defeats in last four home games in NBA.

Coach Dave Joerger has no fresh injury worries and he can count on all of his key players for the season opener against San Antonio Spurs, but Darren Collinson serves an eight-match ban.

Despite being regarded as underdogs in the opening match of the season against Golden State Warriors, San Antonio Spurs did remarkably well to beat the title holders at Oracle Arena (129-100). Kawhi Leonard scored 35 points in the victory over Warriors and, no doubt, he will pose a big threat for Sacramento Kings on Thursday evening. Pau Gasol failed to impress on his San Antonio debut, but it has to be noted that the Spanish ace spent no more than 18 minutes on the court. Anyhow, Gregg Popovich’s men proved their worth in the triumph over Golden State, but they need to keep on raising their form if they are to finish the regular season in top position in Western Conference. LaMarcus Aldridge impressed in the season opener as well and it seems as if Tim Duncan is not going to be sorely missed in the 2016/2017 season. Aldridge scored 26 points, while adding 14 rebounds in the victory over Warriors.

Spurs guard Danny Green will be out of contenton for three weeks through injury, but coach Gregg Popovich has no other selection worries ahead of the Sacramento game.

Sacramento Kings suit San Antonio Spurs. In six of their last seven meetings in NBA Spurs emerged triumphant and considering that Gregg Popovich’s men rolled over star-studded Golden State Warriors in their opener, away win appears on the cards in this one. When the two teams met in Sacramento on 25 February, 2016 Spurs recorded a 108-92 win over Kings.