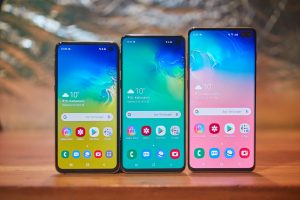 Recently, unveiled its new flagship smartphone, the Galaxy S10. Beside many of its features, interestingly enough, the device also comes with a range of apps designed and applied for cryptocurrencies and general blockchain tech.

This is big new and also a relevant story for the crypto ecosystem because it comes from one of the leaders in this field. As a player at the very top of the smartphone market, Samsung is one of the main movers and shakers, especially when it comes to the application of new technologies.

Many will label the use of crypto features in Galaxy S10 as a herald of a new age where a mobile device without some cryptocurrency and blockchain app will be unthinkable. Others will likely call the additions cosmetic and express doubts about their impact or potential. In any case, here is a showcase of the new Samsung device and an analysis of the impact it could have on the crypto mobile device application.

A New Type of Tech

Samsung showcased the first official specifications for the phone on Wednesday in the US. The announcement just touched upon the availability of the feature of storing cryptocurrency private keys. In South Korea, the same features were explored further as the tech giant unveiled the phone there first. The phone possesses an app called Blockchain Keystore that allows the users to store their crypto funds in a more secure manner.

The functionality breaks down into three categories digital signatures, crypto transfers and storage and direct payments to merchants. Aside from this, the phone app can secure distribution of data, provide content copyright management, do contract verification and insurance, share content directly, manage ownership of in-game items as well as do a process of management of digital assets and transactions. These features, especially the in-game item management, mean that the app and the phone will quickly find a strong following in the gaming and esports crowd.

The app’s terms and conditions stipulate that the Blockchain Keystore makes and stores its private keys using a blockchain tech and a secure enclave that has been created in the device. It can also securely store and sign any cryptocurrency transcriptions through the use of blockchain. In this sense, the word device is related to mobile smartphones and tablets that Samsung Electronic produces.

As far as anyone can tell, the company is determined to have Blockchain Keystore installed on all of its mobile devices and maybe even notebooks as well. This should happen in the long term but still showcases that Samsung, along with its blockchain developer partners, sees this as an important priority for the future development of the company.

The Galaxy S10 even opens the door to the use of third-party services that would allow it to use dapps and other blockchain-based mobile device applications that offer a decentralized structure. The phone’s menu hints at this option with the access to the Dapps sub-menu right along with the cryptocurrency wallet button that will be used for things like bitcoin and other digital currencies.

When the user first time sings into the Keystore, Samsung explains that the user’s personal key is needed for the different blockchain services, which has to be stored in a safe manner. In this case, the key is a password and Samsung employes the Knox series that is introduced in 2013. Additionally, the phone S10 series includes an AP or application processor Exynos 9820 that has a cryptographic key management tech. These are just a small part of the overall S10 structure designed to provide safety and security for the private keys.

The phone also allows the users to store the keys either on the device or on the third party service. If the phone is lost the private keys are all backed up on a personal cloud account that is provided by Samsung. These can be deleted remotely from a missing device and the service can even resort accidentally deleted keys. But, at the same time, many are objecting to the centralized manner in which keys are stored and the problem if someone gains access to the Samsung storage that could potentially end in the desire. Many in the blockchain developer community are hoping so see answer and reassurances from the company.

The company took the effort to explain and introduce the digital wallet and also how anyone can get or send funds using it. The users need to input the address and among, after which a fee is taken out once they use the send button and confirm using a PIN or fingerprint ID. With the completed authorization the funds are sent.

Wallet addresses can be scanned using a QR code when this is available and through the process minimizes the chance of accidental transactions and other problems. The users can both create a new wallet or import existing funds into existing ones. Currently, the app provides support to bitcoin and ether cryptocurrencies but there are at least of a couple of other alternatives planned for the near future. The most likely candidates are the ERC-20 tokens, as well as a hint to the ability of Blockchain Keystore to connect with the Samsung Play service in the near future.

The current impact of the Galaxy S10 is not huge because of the fact that it is a single model featuring a single app for the cryptocurrency transaction purposes (this is how most users would see the same application). However, it speaks volumes about the direction Samsung is headed and why all blockchain developers aiming for the mass consumer market should take notice.

As the offer of the app on different devices grows, so will the people flock to the ecosystem many of whom might have never considered before. But now, thanks to the fact that they will have a very user-friendly alternative at their disposal, the use and adoption of cryptocurrencies might come naturally for many of them. Right now, most in the crypto domain will just want to see Samsung continuing on this path in the coming months.