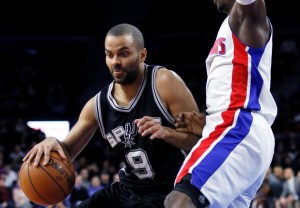 Having recorded five consecutive wins on the travels, San Antonio Spurs will be looking to give fans yet another reason for celebration when they take on Detroit Pistons at their AT&T Center on Wednesday evening.

San Antonio Spurs did not play an important role in the 2014/2015 NBA play-offs, with the team suffering a loss to LA Clippers in the Western Conference semis. Gregg Popovich’s men, though, have been impressive in the new campaign so far, but they have constantly been with one eye on Golden State, who are enjoying yet another season to remember. Spurs, though, should mind their own business and they will be looking to extend their winning run to six matches when they face Detroit Pistons in their first home game since 19 February. San Antonio aim to keep their 100% record intact and they are widely expected to record their 29th consecutive win at home court. Gregg Popovich’s team outplayed their local rivals Houston on Saturday evening and you should have in mind that Kawhi Leonard and LaMarcus Aldridge led the team to their 50th win of the season with 53 points between each other.

Gregg Popovich has no fresh injury worries ahead of the visit of Detroit Pistons, but the experienced tactician is likely to stick to his rotation policy.

Pistons eyeing a place in the play-offs

Detroit Pistons have been in a thrilling form of late. Stan Van Gundy’s men are determined to book their place in the play-offs and they sit in seventh place in the Eastern Conference standings at the moment. Anyhow, Pistons need to keep on improving their game if they are to participate in the 2015/2016 NBA play-offs. Thanks to a 114-101 win over Toronto Raptors the team extended their winning run to four games, but beating San Antonio Spurs in Texas is easier said than done. Jackson had 19 points and 8 assists in the victory over Raptors and he will be the man to watch in the away side in Wednesday’s clash at AT&T Center. Stan Van Gunday’s team are not regarded as good travelers and it has to be noted that they have recorded 13 wins on the road this season, while suffering 18 defeats. Detroit, though, did well to beat Spurs in San Antonio last season and that is giving the fans a reason for optimism ahead of the trip to Texas.

Rookie Stanley Johnson missed the Toronto game with injury and he is unlikely to recover in time to face San Antonio Spurs. Johnson has been averaging 10.4 points in last ten games. Anthony Tolliver remains in the recovery room.

San Antonio Spurs have been producing outstanding performances at their AT&T Center this season and home win appears on the cards. Spurs are breathing down Golden State’s neck and they certainly want to clinch top position in the Western Conference. Seeing that Detroit have been far from impressive on the road this season, I am tempted to put my money on Gregg Popovich’s charges.