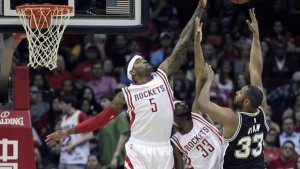 All eyes will be on AT&T Center when Houston Rockets and San Antonio Spurs face each other in Game 5 of the Western Conference semis. Rockets leveled the series to 2-2 on Sunday, meaning that a close encounter appears on the cards.

No Parker, no party

San Antonio Spurs did well to beat Houston Rockets at Toyota Center (103-92) in Game 3, but the match was marked by Tony Parker’s injury. The French superstar was sorely missed in Sunday’s clash against Rockets and it is no surprise Mike D’Antoni’s men leveled the series. Spurs now need to find a way to take control of the tie without Parker and that is easier said than done. Patty Mills will certainly spend more time on the court in upcoming games, but, as always, a man to watch in the home team will be Kawhi Leonard, who failed to impress in the 125-104 loss to Houston in Game 4. San Antonio are tough to beat at home, but they will have to be at their sharpest in Tuesday’s showdown if they are to regain the lead in the play-offs series against Rockets.

Tony Parker is definitely out of contention with a knee injury, but he is the only absentee in the home team. Coach Gregg Popovich has no other selection worries ahead of Game 5.

Houston Rockets quickly bounced back from a 103-92 loss to San Antonio Spurs, with the team beating Gregg Popovich’s men 125-104 at their Toyota Center. Key player James Harden led Houston to the triumph with 28 points and 12 assists and he is likely to prove a handful for Spurs in Tuesday’s match at AT&T Center. Seeing that San Antonio ace Tony Parker remains in the recovery room, many people expect that Rockets are going to win Game 5, but they will have to prove their worth on the court. Rockets were outclassed by Spurs at AT&T Center last time out and the visitors must prevent Kawhi Leonard from scoring more than 25 points if they are to emerge triumphant in Tuesday’s game. Eric Gordon scored 22 points in the 125-104 victory over San Antonio, meaning that Spurs should have him at bay as well.

Nene Hilario is sidelined with a groin problem, whilst Chinanu Onuako misses the game through suspension. Coach Mike D’Antoni is unlikely to make changes to the starting line-up that faced Spurs in Game 4.

San Antonio Spurs outclassed Houston Rockets in their last meeting at AT&T Center, but they will be without Tony Parker in Tuesday’s encounter against Mike D’Antoni’s charges. James Harden impressed in the 125-104 triumph over Spurs, “The Beard” is enjoying a season to remember and he is likely to lead Rockets to yet another away win in the 2017 NBA play-offs.