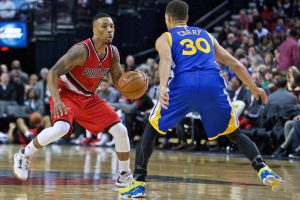 All eyes will be on AT&T Center when San Antonio Spurs and Portland Trail Blazers face each other in what is expected to be one of the most entertaining games of Thursday’s program. Blazers are desperate to book their place in the NBA play-offs, whilst Gregg Popovich’s team aim to stay in the race for top position in the Western Conference.

A win for top position

Thanks to Kevin Durant’s injury San Antonio have good chances of finishing the regular season in first position in the Western Conference. Spurs are level on points with league leaders Golden State Warriors, but a win over Portland Trail Blazers could see them overtake Steve Kerr’s men in top position in the table. Gregg Popovich’s troops outclassed Warriors (107-85) a few days ago and, to make things even better for the fans, they recorded a 107-99 victory over Atlanta Hawks on Monday evening. Kawhi Leonard scored 31 points in the triumph over Hawks and the team’s top scorer will certainly pose a big threat for Portland Trail Blazers in Thursday’s clash at AT&T Center. It has to be noted that Spurs are eyeing their tenth consecutive win at home.

The likes of Tony Parker and Dejounte Murray have joined LaMarcus Aldridge in the recovery room, but coach Gregg Popovich has no other selection worries ahead of the visit of Portland Trail Blazers.

Portland eyeing a place in the play-offs

Portland Trail Blazers were more than unfortunate not to beat Washington Wizards in their last home game. Blazers were defeated by Wizards in overtime (124-125), but they quickly returned to winning ways, with the team outplaying Phoenix Suns at Talking Stick Resort Arena. Terry Stotts’ charges are sitting in ninth position in the Western Conference, one spot behind the play-offs berth and they are likely to leave their hearts on the court in Thursday’s clash against San Antonio Spurs. Key player Damian Lillard scored 39 points in the 110-101 triumph over Phoenix Suns and he will be the man to watch in the away team. Nonetheless, the fact that Blazers were beaten by Spurs in each of their last six meetings in NBA is not giving fans a reason for optimism ahead of the trip to Texas.

Ed Davis misses the match with a shoulder injury, whereas Evan Turner is sidelined with a hand problem. Festus Ezeli is out for the rest of the season with a knee injury.

Both San Antonio Spurs and Portland Trail Blazers are eager to win Thursday’s clash. As previously mentioned, Spurs aim to climb to top position in the Western Conference, whilst Blazers need a win in order to keep their hopes of booking their place in the NBA play-offs alive. Seeing that the hosts will be without their starters LaMarcus Aldridge and Tony Parker, away win should be considered.