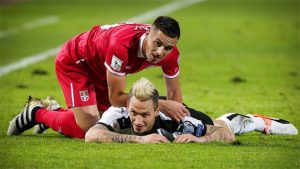 Serbia have won the first game and are at the top of Group E but they’ve been less than convincing so far even if some players performed well. They had less possession than Costa Rica and had the same number of shots at goal. In the end, a brilliant effort from Kolarov sealed it.

On the other hand, Switzerland don’t have much in terms of top talent, but they are well organized and play like a team. They will also be on a high after snatching a draw after being outplayed and outshot 21-6 in their game against Brazil. You could even say they were a little fortunate.

The stakes can’t be higher as this game has the potential to decide on who will progress from the group stage.

Dig up the trenches

Coaches from both sides will know that whoever wins the midfield battle will take home all three points. And with them a trip into the 1/8 finals. This is why both teams will focus on maintaining a stable defensive posture and taking their chances on the counter.

It’s a great matchup to have a steady Suisse defense against a more than capable Serbian offense. If Matic and Milivojevic can keep their back safe and provide quality passes up front, the Serbs might swing this. However if Behrami manages to contain Mitrovic like he did Neymar in the first game, the Suisse are in with a chance.

The Serbian team is known to have talented forwards and can move the ball around. Out in the front they have Mitrovic who has helped Fulham get promoted after being the top scorer in the Championship in the second half of the season. Although there might not be any “Mitros on fire” chants from the stands this time. Tadic and Ljajic are a couple of fast and attacking wings with proven passing and goal scoring skills.

Xhaka and Shaqiri are also solid, fast players and Zuber is capable of providing a moment of inspiration in any game even though this will be only his 15th game for the national team.

Nevertheless, the game might potentially be ruined by too many stoppages as there’s bound to be a lot of fouls and maybe even a few yellow cards.

Both teams will more than likely field the same teams as on Game Day one. All indications are that it’s going to be a hard fought battle in the midfield with goal scoring chances few and far between.

The Suisse team will be on a definite high after managing to secure a point against Brazil. There is a chance that, if they open up a little bit because of that point, they could leave themselves open to a counter attack and the Serbian team is great in transition.

Most betting sites expect a draw-draw scenario with 0-0 at the half and a score draw at the final whistle. Some have the Serbs as underdogs giving the Suisse slightly better odds. Others see it differently. It could go both ways but we are still thinking a draw will be the probable result.