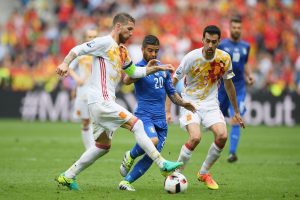 This match will take place at the Luzhniki stadium where Russia played their opening game and beat Saudi Arabia 5:0. Expectations were high after the first two games but slightly dampened by the loss to Uruguay where Russia had only three shots at goal, lowest by any host nation in a single game in the history of the World Cup.

Spain played two exciting draws but have conceded late against Portugal and were saved by a VAR given penalty against Morocco. They have struggled to find that right form. They will need to find it against the confident Russians. The Spaniards will also be confident as they have scored 10 goals against the Russians in their last three head to heads.

Putting on a display

While Diego Costa has shown he is in good form, scoring three goals so far, Spain have under-performed as a team. They’ve allowed too many goals and drew against Portugal and Morocco. Even the win against Iran wasn’t too convincing.

Some reports said that Hierro was going to drop goalkeeper De Gea for this game but that doesn’t seem to be the case. They certainly need to play better defensively.

However, this might have just been a slow start and you shouldn’t bet against them putting on a display against the, in a way, over-achieving Russians in this 1/8 finals match.

At the start of the tournament, Spain was ranked No 10 in FIFA rankings while Russia was at a lowly No 70 and the worst placed nation in World Cup. Most experts expected them to fail and not make it out of the group stage.

Some thought game one win was a fluke. But then they won again and were sitting pretty at the top of the table before the loss to Uruguay brought them back to the ground.

They will know that Spain has already conceded five goals in three matches. Cheryshev and Dzyuba will like their chances up front against a not so convincing defense and with the support of their fans, anything is possible. They certainly have something to prove to themselves and the rest of the world.

Spain are the clear favorites. They have the talent and the head to head record on their side. They haven’t exactly impressed in the group stage so they will be looking to play much better.

The Russians were impressive in the opening two games but then got stung by Uruguay. They will also have a point to prove against a former World Cup and Euro winner.

We are most likely to see Spain go away with a win. Still, we shouldn’t discard the underdog in this case, Russia, especially not in front of their home crowd. If you think they might spring a surprise, odds on them winning are 6/1.