Opinion The Strange Story of the Long Blockchain Corp. 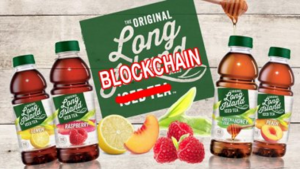 In the days when the entire board of global cryptocurrencies is in deep red with two-digit losses, most analysts are focused on trying to figure out what brought about the huge fall in prices and market cap. The drop was followed by the worst plummet on Wall Street since the start of the Donald Trump presidency, but answers are few and far between.

Right now, it appears that the markets have been slightly stabilizing with BTC, BCC, ETH, and LTC all going into modest green range. As the search for possible reasons for the fall begins, a new story appeared that could be used as a great example of the chaotic nature of the crypto market.

The story is about the Long Blockchain Corp. and their most recent decision to stop with the plans to become a cryptocurrency mining operation. This is only the last element of the tale of the former Long Island Iced Tea Corp. and in it, the reasons for the erratic motion on the markets can be found.

Long Blockchain became this company in 2017. Before that, it spent six years under the name of Long Island Iced Tea that was listed on NASDAQ under LBCC. The corporation was based in Farmingdale, Long Island, New York and it produced iced lemonade and iced tea using the Long Island brand.

With this product, it found success in the US market, but all of this changed when the corporation decided to switch its main focus of the operation. In 2017, it decided to begin to explore opportunities and invest in options that utilize the benefits of the blockchain technology. Inside of this decision, the rebranding process remains, inducing its well-known name.

At first, the media picked up the story believing it is a particle joke. At that period, many noticed that as soon as a company added a term like “blockchain” in its name, its stock price shot up immediately. However, Long Blockchain Corp. was not joking at all.

The first tangible move towards the digital currency business came when the company decided in late 2017 to purchase 1,000 AntMiner S9 crypto mining rigs. The idea was to open up a mining facility and began working on attaining digital currency. With millions around the world using it to bet online, purchase things and do many more actions using digital currency, the mining business seems like a natural and safe entry point into the industry.

However, just a month after that purchasing deal was completed, Long Blockchain Corp. decided to scrap it. This happened recently when the company stated to the U.S. Securities and Exchange Commission that it is scrapping its plan to buy the rigs and the power sources.

There has been no official explanation why this occurred. One thing is sure – Long Blockchain was expected to provide $4.2 million to finalize this transaction. It had until the end of January 2018 and now, apparently, the same deadline, like the initiative, has been scrapped.

When the plan was announced, the company stated that its plan to use its 1.6 million shares of newly issued common stock to attain around $8 million. The success of this is unclear, but the company did pull the stock sale from the table just a week later.
The representative of the company said that buying miner rigs were only a single facet of their big strategy of being involved with blockchain. He also said that even though these miners will not be purchased, the company still believes in the mining process.

However, it looks like the market is not buying the same narrative. Since the start of 2018, the price of their stock has been cut in half. Not only that but as of now, the stock is running the risk of being taken off from the Nasdaq’s exchange.

There are two big lessons that have to be taken out of the whole Long Blockchain story, even though it is still developing. The first one is related to the issue of why would an ice tea company decide to stop making ice tea and start investing in blockchain?

The decision makes little sense. There is nothing strange or foreign in the idea of investing in this tech. It will definitely change the world in some shape or form and it already began with the digital currencies. However, that aside, even investing in the idea of a growing field of cryptocurrency makes sense, being that both companies and individuals managed to generate quite a bit of profit with it.

The problem is why would the whole company switch to this process? The much more sensible idea would be to build a new company and allow it to organically grow and develop. It could even remain inside of the wider Long Island Tea brand, no matter how weird this might seem at the first glance.

Blockchain, like eSports and social media, for example, is a native digital tech. Thanks to this, it works with strange branding and marketing decisions and to a degree, even needs them. Yet, simply switching the focus of an entire company on blockchain, especially a company that had nothing to do with the digital domain, looks like madness. The first lesson is – do not start a blockchain-based business by just saying you are in the blockchain business all of a sudden.

The decision was not madness, but most likely, a desire to use the fact that the company was being publicly traded. The second lesson is that the adding-blockchain-name maneuver had a limited life in the stock market.

It is hard pinning the same motivation on the Long Blockchain company, but from this perspective, especially with the cancellation of the rigs, it sure looks like it. The stock prices did not go up as expected, so the plan was out of the window.

Where does all of this leave the company now? It is not sure, but both lessons are indicative of the entire market, which is becoming a place where every crazy plan can get its 15 minutes in the spotlight. That is also the reason why no one should be suppressed when the crypto market is awash in a sea of red candlesticks.